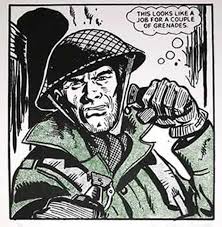 One response to “Being brave in SE8: Extraordinary Heroes at the Imperial War Museum”