Read or Dredd: 2000 AD at the Cartoon Museum

Everything I love about British pop culture is encapsulated in 2000AD, which celebrates its 40th anniversary in February 2017. There are several birthday events planned, including an exhibition at the Cartoon Museum in Bloomsbury that runs until April 23rd. I had a look around in the company of the curator Steve Marchant, who enthused about the gorgeous clarity of the original artwork from Dave Gibbons, Brian Bolland, Mike McMahon and Carlos Ezquerra (“At times, the comic looked like it was printed with mud on toilet paper,” he said), while I reacquainted myself with the world of Dredd and Rogue Trooper. 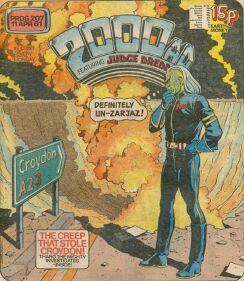 As a kid, my comic-reading progress went something like this: Beano, Transformers, Roy Of The Rovers, 2000AD. It wasn’t quite that simple – the first comic I ever read was Beezer, and I was a big fan of Whizzer And Chips. When I was reading Transformers, I was also regularly reading Batman and Superman. And for a while, I got really into a horror comic called Scream!.

But in this journey, 2000AD always seemed like the inevitable destination. Even when I was reading the playful pranks and japes of Dennis and Minnie, I’d see 2000AD on the rack at WH Smiths and quiver in confused anticipation at the cover, and the weirdness and violence it promised.

I knew one day I’d be ready.

The exhibition at the Cartoon Museum starts by showing how 2000AD was created and how it developed. I learnt that the initial hero was soppy space curate Dan Dare, in whose blue-eyed banality I saw as the very opposite of what 2000AD stood for. Several other strips – often loosely based on popular movies or TV series – were given a turn until Judge Dredd inevitably took over. And it was Judge Dredd who most fascinated me. He is a brilliant creation, this square-jawed, deadpan, literal-minded, licensed thug who you can never be sure is good, evil or amoral. Sure, America had Batman but he was a playboy billionaire who frequently expressed moral conflict. Dredd, by contrast, was a foot soldier with no exterior life who always knew what he was doing was right because he was law incarnate. In that lack of doubt, he had more in common with supervillains than superheros.

But what made Dredd sing was the universe around him, and especially the surreal, sinister Mega-City One, which had its own architecture, slang, fads and culture. The world of Mega-City was often very funny and satirical – giant tower blocks named after some of the most insignificant 20th century personalities and politicians – and Dredd was this single-minded avatar plodding through it, trying to erase difference and make sense of it all.

The combination was fascinating: a strip could be at once nihilistic, surreal, smart, sarcastic, joyful, violent and morally ambiguous. One strip at the Cartoon Museum illustrates this neatly: Dredd is spending Christmas Day on the beat, by the end of which he has deported an illegal immigrant, shot a fellow judge and punched a well-wisher in the face. And this was the good guy.

Much less ambiguous was my other favourite character, Rogue Trooper. The exhibition looks at several long-standing strips including Judge Anderson, Strontium Dog and the wonderful Halo Jones, but it was Rogue who I adored. He was weird – taciturn and blue, with a talking gun, back pack and helmet – but he at least provided some moral clarity after Dredd. The concept was simple too, a sort of future war Fugitive, with Rogue out to hunt down the man who betrayed his unit – the classic quest that could be strung out for as long as possible.

It’s heartening to see 2000AD is still popular today. When it was formed, it was assumed it would last around six months, as that was the usual lifespan of new comics – indeed, the aforementioned Scream! folded after 15 issues. That it is still relevant is testament to the skill of the artists and the writers, who continue to ensure there are sufficient parallels with the real world for plots to be relevant. A couple of strips at the Cartoon Museum showcase this perfectly: in one, a patriotic, racist robot sings Rule Britannia and whines about foreigners as it goes on the rampage amid the skycrapers of Brit-Cit; in another, Chief Judge Caligula has taken power, a deranged, rambling permanently enraged narcissist with a huge ego and lustrous hair who insists on building a giant wall around his crumbling empire.

Remind you of anybody?

I have recorded a podcast with N Quentin Woolf for Londonist about Battersea Power Station. It covers the full history of the site, looking at the history of the power station, the property battles, failed dreams and possible future.

On Friday, I will be a guest on Wandsworth Radio at around 6.30, again talking about Up In Smoke and the power station.

The image above, incidentally, is a screengrab from Ray Davies’s excellent 1984 film Return to Waterloo, starring Tim Roth and Ken Colley, which is set largely aboard the 8.52 from Guildford to Waterloo. Recently released on DVD, I review it in the forthcoming edition of Uncut.