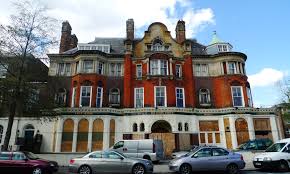 When I first clocked a recession was imminent – after I’d checked the relevant terms of my contract and cancelled the statue of myself in solid gold I was having made for the front garden – I began to think about the opportunities that a recession can create.

It’s now well established that many business start up during a downturn, largely because lots of people are out of work and have nothing better to do than be a bit imaginative. This time round, with the recession taking such a toll on incredibly wealthy financiers and bankers, who earned far more money during the Great Moderation than they could ever spend no matter how much they ballsed up house prices trying, I was convinced some fascinating new businesses would emerge.

And so it has proved. A while back, a man called Ajit Chambers got in touch with me to promote his bold plan to open up London’s disused Tube stations to the public. He is still ruthlessly pursuing his vision and will, I believe, realise it, sooner rather than later. For more, watch this space.

At around the same time I heard from a friend, Marisa Leaf, who has set up a company called Hubbub that takes orders from customers for posh delis around Islington (of which there are many) and delivers them all in one go to your door. I wrote about it in 2008 and on Tuesday, she was interviewed in the Evening Standard. In that piece she mentioned in passing one of the people whose food she sells, a banker from Highbury who jacked it all in to become a fisherman on the south coast. I interviewed him yonks ago, and the piece is due to run in Time Out sometime before I die, or so I have been promised.

So that’s three stories that have come to me without me even looking, as all the best stories should.

Where am I going with this? Well, I am in a decent position to start up a business of my own, being all of a sudden time, if not cash, rich and finding freelance journalism a potential struggle given that I’m not descended from anybody famous, daringly tedious/controversial or Stephen Armstrong.

But there is a problem: I am suffocatingly risk-averse. And I am quite lazy. However, I do have one idea that I would love to take forward if somebody else is prepared to do the taking forward bit for me.

It’s a crisp shop. A shop dedicated to selling not just any crisps, but the most interesting crisps – or other potato-based snacks – from around the world. These would be crisps of the rarest and most unusual flavours, the best packaged, golden oldies, with lots from Japan, where I do not know for sure but am pretty certain they make some of the most incredible crisps known to the crisp-world, in wonderful flavours and colours, and all with pictures of schoolgirls on the cover. This shop would be in south London, probably Streatham, and look like one of those trainer shops where people buy lurid and expensive footwear that they never intend to wear. It will be a design classic, floor-to-ceiling cellophane. Whenever Jay-Z comes to London, he will make my crisp shop one of his first ports of call, because I am sure Jay-Z loves crisps.

The irony of this is that I do not particularly like crisps. Or Jay-Z for that matter. But this only adds to the beauty of the concept.

If you like it, I will next tell you about my plan for a restaurant that only serves starters and desserts, because main courses are, and we really should be prepared to admit it by now, invariably a crushing disappointment.