I wrote this piece for a recent issue of Waterfront, the Canal & River Trust’s superb magazine for canal lovers.

In theory, it doesn’t take long to move off a canal boat. When I finally left my floating home of seven years, all I really needed was a couple of hours with some sturdy cardboard boxes and a roll of bin bags, such is the lack of storage space for anything other than the most basic of life’s essentials. But how long does it take to get over moving off a canal boat? I’ll tell you when I manage it.

I left for love, having bought a flat with my girlfriend, but also for central heating, storage space, flushing toilets and a water supply that never ran out. The decision was helped by the fact my boat was in poor condition. I’d been spending less time there, and the neglect was starting to show. I’d never been the most diligent of handyman and a boat deteriorates quickly, so by the time I moved away the boiler, fridge and cooker were condemned or unreliable. Then there was the toilet. The terrifying condition of this medieval contraption was the main reason my girlfriend wouldn’t spend much time on the canal, and helped make dry land – with its ready access to an actual sewer – seriously appealing.

There was more. Now at least I wouldn’t have to mentally filter every item I acquired – every book, CD, mug, apple or pair of socks – to decide whether I could really afford the room. I’d never wake frozen to the core having come home too late to light the fire. I’d never run out of water in the middle of a shower because I’d forgotten to refill the tank. That time when I ended up taking a shower in diesel after a can of oil leaked into my water tank would, surely, never be repeated. I’d be able to have a bath, and my mum could stop worrying about me accidentally falling in the canal when I arrived home, unsteadily, after midnight.

All this was true, and yet from the start there was much I missed. Quite simply, living on a boat never gets boring and it was never something to take for granted. I had never grown tired of returning each evening and unlocking the mysterious gate in an unremarkable wall that allowed me to descend from noisy street to the secluded world of the towpath. I felt privileged to be part of this secret universe, populated by fascinating people. It wasn’t just about seeming cool – although that had something do with it. Boat life really is interesting, both as a concept and as a way of life. These were the rewards you got for the discomfort.

It could also be exhausting and at first, I revelled in the luxurious space of my tiny flat but even this proved illusionary. A good boat has excellent storage but also genuine, unbreachable limitations on what you can accumulate; flats and houses have no real limits, you can continue stacking stuff almost indefinitely in corners and under beds and sofas until you are so suffocated by physical objects you find yourself desperate to move. On a boat, you cannot hoard. It was an excellent discipline that in some ways I retain – I don’t keep newspapers or magazines, for instance, and am always getting in trouble for instinctively throwing away any letter or piece of paper that seems to have been abandoned in the same place for too long.

I didn’t return to the canal for several years after leaving my boat – canals being easy to avoid unless you go out of your way to find one. When I did go back, I was struck by a disorientating sense of saudade, a nostalgic melancholy for what has passed. As I wandered down the once familiar towpath, noting old boats in new moorings, new boats in old moorings and the excellent paint job on my former home, I realised how much I missed the chaotic camaraderie of boat life. We lived on top of each other in a way that was as close to communal living as you can get outside of student digs. In my flat, by contrast, I took the stairs rather than get stuck with a stranger in the lift.

Even now, years later, there are times I miss the canal most painfully. The pang can be triggered by the slightest thing – the smell of coal smoke on crisp winter evenings, the sight of a perfect blue sky in August, the sound of hard rain late at night. It comes back most powerfully every time I step aboard a boat. There is that initial give and roll, the subtle shift of weight that comes every time you leave dry land, and then the short descent into the comforting darkened corridor of a cabin with its warm smell of water, smoke and diesel. One day, I think, one day I will come home. 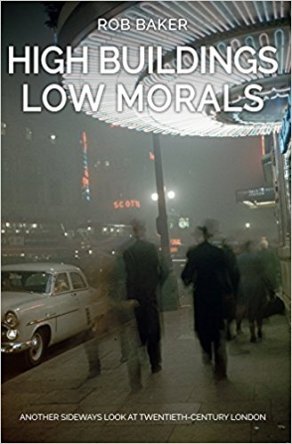 I wrote about Rob Baker’s last book – Beautiful Idiots, Brilliant Lunatics – a couple of years ago. It’s a collection of London-based short histories inspired by Rob’s superb blog, Another Nickel In The Machine. Rob’s now written a follow-up, High Buildings, Low Morals, which again explores a dozen London stories from the 20th century, some entirely forgotten and others well-known but brilliantly written by Baker, who takes a familiar tale – say, the Streatham brothel of Cynthia Payne – and use it to discuss something loosely related, such as the history of luncheon vouchers.

The fun of this approach can be seen in the opening story, which is about the infamous “headless polaroids” showing a Mayfair socialite giving an unknown man a blow job – the four photos had handwritten captions, “before”, “during”, “oh!” and “finished”. The photos were at the centre of an infamous divorce case but Baker also brings in Noel Coward lyrics, PG Wodehouse, Mussolini, Barbara Cartland and Normal Mailer.

Baker often focuses on a scandal of some sort but I particularly liked the chapter about Graham Greene’s wartime activities during the Blitz, which followed the author at work as a fire warden on one of the worst evenings of bombing. Within each chapter, are a handful of great facts and in the Greene section I learnt about a restaurant, the Hungaria on Lower Regent Street, which advertised itself as being “bomb-proof, splinter-proof, blast-proof, gas-proof and BOREDOM PROOF”. The restaurant had “a fleet of private cars driven by tin-hatted chauffeurs ready to take you through bomb blasts and shell fragments back home.” 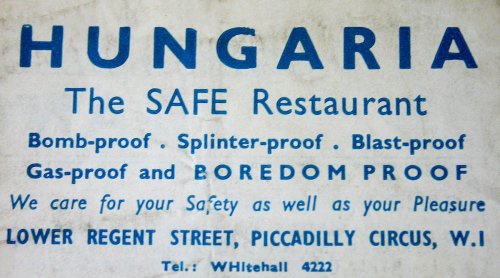 Other chapters take in the IRA’s operations of the 1970s, the Oz trial, and the extraordinary Lord Boothby. One of the best is about Tallulah Bankhead, who caused a scandal in 1928 when she hosted sex and cocaine parties for Eton schoolboys. An Eton teacher was said to have told her, “We don’t at all mind you taking some of the senior boys over for a smoke or a drink or a little sex on a Sunday afternoon. That doesn’t upset me. What does upset me is you giving them cocaine before chapel.” 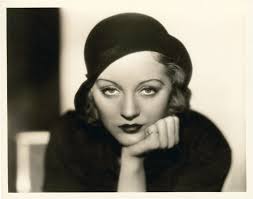