It’s 50 years since the Rolling Stones played their famous free gig at Hyde Park. The show was their first with new guitarist Mick Taylor, and was given added poignancy as Brian Jones died a few days before it took place. To commemorate his death, Mick Jagger decided to release a box of butterflies while quoting Shelley. 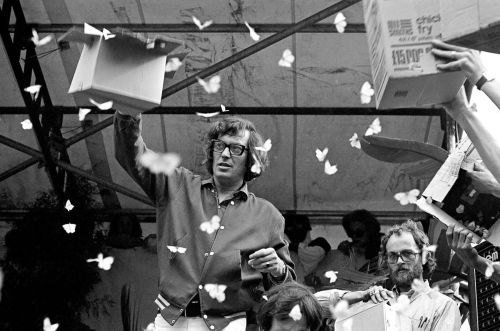 Five years ago, I wrote an epic, 3-million word oral history piece about the gig for Uncut, which included promoter Andrew King’s memory of Mick’s gesture.

Jagger was going to release these white butterflies. I had to liaise with this butterfly farm in the West Country and the parks people who were very concerned the wrong sort of butterflies might upset the ecosystem of the park. Eventually, we agreed on a species. Early on the morning of the concert I went down to Paddington Station to collect these boxes of butterflies, they came in these things like wine boxes, about half-a-dozen. I peeped inside and as far as I could see it was full of dead butterflies. So I called the butterfly farm in a panic and said, ‘They’re dead!’ And they said they’re not dead, they’re cold, they are sleeping, you’ve got to warm them up.”

How the fuck were we going to warm them up? We had these old hot plates, the sort of thing students use to warm up baked beans, and so we put the boxes of butterflies on them to warm them up. I think one of them caught fire. When Mick opened the boxes, some of them flew away but most dropped senseless to the stage. They weren’t dead, they were cold. They only died when they got trod on.’