I wrote a piece for the August issue of Eurostar’s Metropolitan magazine about the appeal of Françoise Hardy.

Hardy was pretty much the only one of France’s 60s pop singers to have any sort of impact in the UK, scoring a couple of hits – even one in French – and some camera time with Mick Jagger. Johnny Hallyday may have recorded with the Small Faces and Jimmy Page, but he achieved little by comparison. Ditto Hardy’s super-cool husband, Jacques Dutronc (watch this clip for a brilliant piece of agitpop), let alone yé-yé singers like France Gall or Sylvie Vartan.

Hardy benefited from being the first French singer to have a hit here, and the UK market could probably only take one foreigner at a time. She had excellent songs of course, but also an appealing vulnerability – it’s in her music as well as the body language in the image above. Unlike most of her French, English and American compatriots, Hardy never seems to smile on her single and album covers. She also had an androgynous Moddish look that was very mid-60s, a little like a French answer to Julie Christie. You can see the attraction to a generation of Euro-sympathising spotty English art school students with intellectual pretensions.

Hardy’s popularity in London was such that in 1965 she made a French TV special in the capital, visiting several sights – palaces, the docks, the parks – and recording songs in unlikely locations such as outside a mew house, in the back of a black cab or while wearing her pjs in bed on the back of a flatbed truck driving round Piccadilly Circus. She also visits a street market and, delightfully, a pub. Some of the visuals are brilliant, such as the scene in which she performs against a backdrop of advertising hoardings.

A selection of stills are below, followed by the entire film. 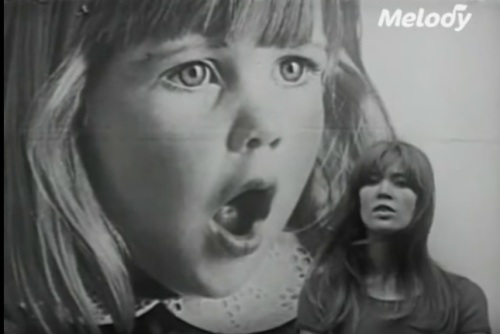 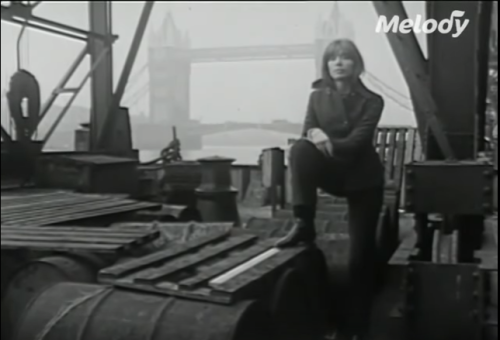 The before and after of Hardy trying a pint are a personal highlight.