I have a couple of pieces about 1967 in the new issue of Uncut, a Summer of Love special. 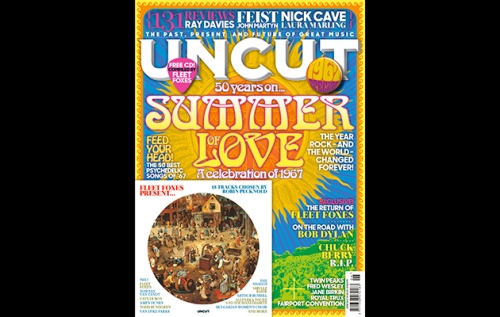 The first is about the Monterey Pop Festival, which became a template for almost all music festivals that followed without actually taking on board the two things that made Monterey such a success – artists played for free and the audience numbers were relatively limited. The concert featured performances from The Who, Hendrix, Grateful Dead, the Byrds, Janis Joplin, Ravi Shankar and several more. The music wasn’t always spectacular but the vibe was clearly unique, thanks to fine weather, excellent LSD and a general mood of harmony both among crowd and audience. I interviewed musicians, organisers and also the guys who did lighting and sound, who provided great insight.

Monterey was arguably the high point in the career of John Phillips, who co-organised the festival, booked the acts, headlined and wrote the best-selling jingle.

It must have seemed that after Monterey anything was possible but in reality – and as a neat metaphor for the movement in general – it was all downhill for Phillips from here. Pete Townshend told me a couple of Phillips anecdotes that I couldn’t include in the piece and so will repeat here.

‘My best John Phillips stories are:

1. He hired my Dad to play sax on a Nic Roeg film (The Man Who Fell To Earth I think). My Dad came home and said, “I thought I could drink, but that John Phillips out-drank me five to one. And he never stopped working, we started at seven, and were still doing takes at five in the morning.” My Dad didn’t really know about cocaine.

2. His sister asked me to call him a few years back to try to persuade him to stop drinking and using cocaine. “Pete!” He was delighted to hear from me. “Have you heard the news?” “Yes,” I replied. “You have a new liver”. “Ah!” He was triumphant. “But it’s a black woman’s liver. At last, I’ve got soul.”

The second piece is about the London scene, which is basically the story of the UFO club but covers everything from the 14-Hour Technicolor Dream to the Dialectics of Liberation conference and the launch of Radio One. I spoke to numerous figures from the scene, including Joe Boyd, Jim Haynes, Jenny Fabian, Dave Davies, Twink, Mike McInnerney and Sam Hutt.

I wanted to make this interesting, to get beyond the Beatles and write as little about fashion as humanly possible, so at the suggestion of Robert Wyatt I spoke to Caroline Coon about Release, the NGO she helped start in 1967 – partly as a result of the Stones bust at Redlands – to provide information and support to those who had been busted for drugs.

I also wrote about the psychedelic art, which is probably my favourite element of the psychedelic experience. Mike McInnerney was excellent at explaining the subtle differences between the key UK practitioners – himself, the Nigel Waymouth/Michael English collective, Martin Sharp and Alan Aldridge.

Hippies are often rejected as fluffy utopians  – partly the fault of The Beatles and “All You Need Is Love” – but I’ve always been impressed by things like Release and Steve Abrams‘s full-page ad in The Times (funded by The Beatles) challenging the marijuana laws. These are radical undertakings, that required considerable gumption and a great deal of practical planning. The underground had these in spades, even if the results weren’t always as intended. This was also the last time when the underground was really united. By the autumn of 1967, political schisms had emerged and pop was beginning to fracture into often opposing genres.

It’s impossible I think to watch the film of Monterey and not want to be there, to feel that this is the world and these are the ideals which we’d all like to inhabit. And no wonder so many still look back on 1967 with such fondness and bristled when I asked if they actually achieved any of what they had intended.