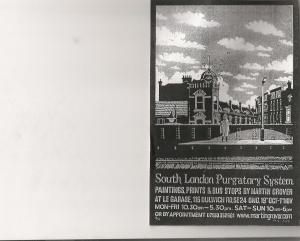 Martin Grover, an artist based in South London, has an exhibition at Le Garage in Herne Hill until Thursday November 1. His paintings are mainly of Brockwell Park, old record covers and bus stops, making him the ideal visual companion to my life.

His bus stop art has now extended from 2D prints into 3D sculptures/installation – in other words, he makes actual bus stops and writes strange slogans on them. 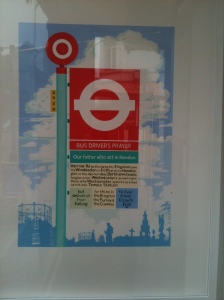 His Brockwell Park paintings are lovely. They are painted from sketches and photographs, although he confesses he makes a lot of it up in the studio, which is why Batman or James Brown might occasionally turn up in one. 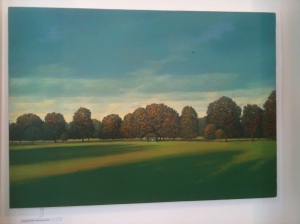 Then there are the record sleeves, perfect reproductions of old 45s: often Stax and Motown but also plenty of country and Dylan.

Hawksmoor at the Royal Academy: bunkum and brilliance

As the adverts all over the tube let us know, there’s currently a big David Hockney exhibition at the Royal Academy. Less well advertised, but far more compelling from a London point of view, is the same gallery’s fine show on the fascinating architecture of Nicholas Hawskmoor.

This takes place in the Architecture Space – a nice name for a small corridor near the restaurant – and features a short introduction to the architect, alongside photographs and paintings (photographed, not originals) of key works that feature or reference Hawksmoor’s work.

Hawksmoor, who specialised in hefty Baroque churches, is not an architect to everybody’s taste. In 1734, James Ralph argued that Christchurch was ‘beyond question, one of the most absurd piles in Europe’.  His reputation was resuscitated by Kerry Downes in 1959, who insisted of his churches that ‘they will repel us or fascinate us, but we cannot escape from their strange, haunting power’. This has been a mantra repeated by writers in the following years.

I actually find it quite easy to escape their powers, strange, haunting or otherwise, but this supposed mysterious attraction of Hawksmoor churches is now almost impossible to ignore or deny. It has been repeated so many times, it’s become fact, as Hawksmoor became the anointed architect for a certain type of London writer, the Peter Cook to Sir Christopher Wren’s Dudley Moore. I admire Hawksmoor’s churches, but don’t see them as particularly profound or unsettling.

Among the first to take up this theme was Iain Sinclair who wrote about Hawksmoor in King Lud (1975). A quote from the book is reproduced on the wall, and it offers a perfect illustration of what I dislike about the psychogeographic way of seeing London: ‘From what is known of Hawksmoor it is possible to imagine he did work a code into the buildings, knowingly or unknowingly, templates of meaning, bands of continuous ritual.’

‘From what is known’; ‘possible to imagine’; ‘knowing or unknowing’. Make it up as you go along, in other words. There’s nothing wrong with this, of course, but I do resent the way it is elevated above all other forms of London writing.

Sinclair has made a career out it, and he does it so well you could almost believe he takes it seriously. A fascinating map drawn by him features in the exhibition, showing his hand-drawn connections between London buildings, and there’s also a great film in which he talks eloquently about his relationship with Hawksmoor, which began when he was a gardener employed by Tower Hamlets to mow the churchyard grass at St Anne, Limehouse. Sinclair is a wonderful speaker, and spins a fine yarn here. 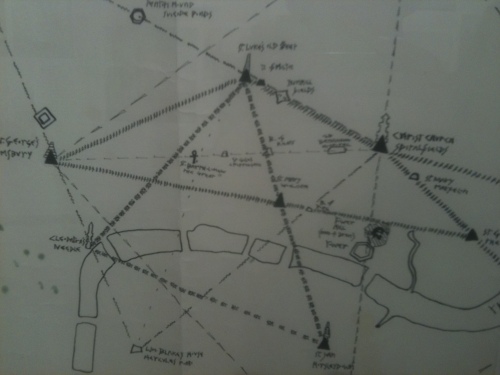 After Sinclair came Ackroyd and Alan Moore, both of whom woves tales of occultish imagination around this indefinable mystery of Hawksmoor churches. Nonsense clearly, but at least it gave us the majestic From Hell, which features prominently in the exhibition.

All this bunkum gets space in the exhibition, but I found much else to entertain besides. There are wonderful photographs and prints of Hawksmoor buildings in many different styles and from varied eras, and also a passionate film by Ptolmy Dean, explaining – quite successfully – the attractions of the easily overlooked St Mary Woolnoth near the Bank of England.

The most interesting element, however, were the photos that drew attention to the parallels between Hawksmoor’s work and more recent buildings. We see a comparison of St Mary Woolnoth and Poultry in the City, and another between St Anne, Limehouse and the National Theatre. It might not be as sexy as psychogeography, but there’s nothing wrong with a bit of straightforward architectural history every now and then. 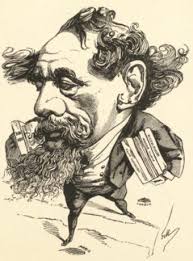