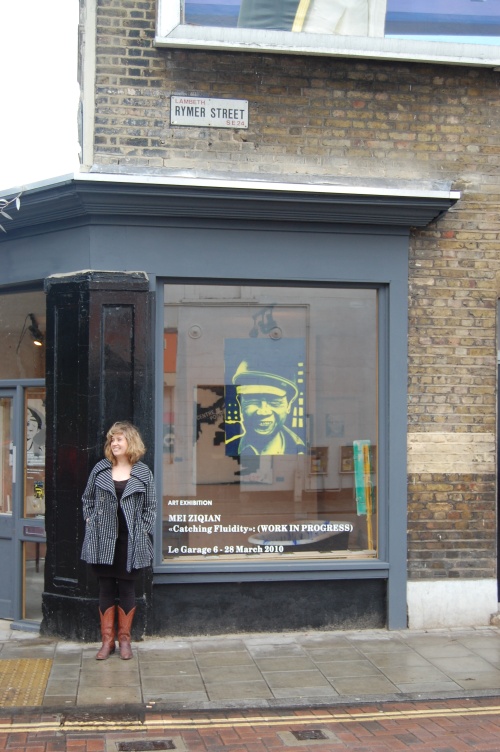 Plonked on a prominent corner site on Dulwich Road, just opposite Brockwell Lido, is La Garage. You can’t miss it. It’s the one with huge floor-to-ceiling windows through which you’ll see an antique bath filled with blue water.

Le Garage is Herne Hill’s newest art gallery. It’s the creation of Alice Bailey, a Canadian who bought the building in auction about three years ago (the name tells you what is used to be) and then started to think about what she was going to do with it. A friend suggested she turn the downstairs space into a gallery, so that’s what she did as soon as she’d finished rebuilding the upstairs and refurbishing it with things she found in junk shops (‘it’s kind of random,’ she says).

‘It was a total accident, I just thought they were great windows and I should put something in them,’ she says, so she did. Currently on display (until March 28) are paintings, photographs and the paint-filled bath by pseudonymous artist Mei Ziqian, and Alice already has three more shows lined up including a photographer, a shadow puppet play and an artist who does embroidered portraits of characters from ‘Coronation Street’. After that, she wants some street art, but is open to any ideas. Drop by if you have something to offer.

‘I want it to be organised but free and organic,’ she says. ‘There are a lot of artists who can’t get shows in London, although I know I’m a bit out of the way here in Herne Hill. A lot of people have already contacted me after seeing this and so far the work I’ve seen has been great. The photographer showing  next is quite well-known, but she wants to do something different from what she usually does, and she doesn’t want to do it under her own name.’

The space is still not fully developed, and Alice is wondering how to use the back room and pondering about turning the garden into a cafe – inspired partly by Scootercaffe on Lower Marsh, where she lived previously. ‘It’s so nice living above your business,’ she says. ‘I really want it to be fun, because it’s a fun space, informal and  friendly.’