Inside the Bank of Ideas

Last week, I paid a visit to the Bank of Ideas, the squat/community centre that has been set up inside an empty office building near Liverpool Street.

I didn’t know quite what to find inside, and while I expected a friendly welcome I was surprised by the  depth of organisation that has gone into the enterprise, owing as much to the methods of middle management as it does the spirit of the co-operative. This is organised occupation on an impressive scale. There were flowcharts, spreadsheets and white boards full of information and advice on every surface, with people running round spreading messages and sharing news. I’ve worked in dozens of newspaper offices where communication was worse than this. It’s energetic, unifying and genuinely impressive on every level.

All members of the media are asked to visit a room next to the entrance hall to sign in and get tapped up for donations (the Bank is run a voluntary basis, with donations and skill-sharing). It was here I spoke to one of the ‘caretakers’, Bryn Phillips, an earnest youngish man in music PR who informed me that they had decided to squat the building when they ‘discovered it was owned by UBS. After researching UBS they seemed the perfect target for a Situationist critique of the finance industry’. As a fan of Situationist critiques, I thoroughly approved. 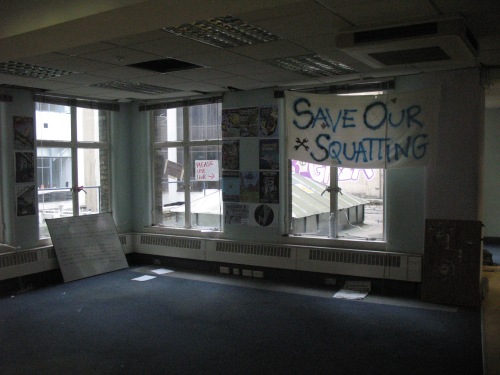 The Bank, of course, taps into a long tradition of London communes and squats that seek to serve a greater purpose than merely place a roof over peoples heads – the best example is the squatting of Centre Point in the 1970s to raise awareness of homelessness – while its educational aspects, the Free University and regular workshops, recall the London Anti-University and Notting Hill’s London Free School of the 1960s, though I’d hazard a guess that neither was as carefully organised as this.

How long the Bank of Ideas will be allowed to remain open remains to be seen, but it should be around in the early part of next week at least. If so, I recommend you pay a visit quickly, before the dead hand of corporatism crushes another lowly outlet of fun and dissent. 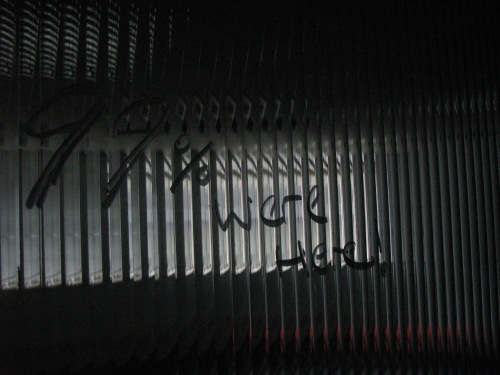 Hell W10: the film that killed the Clash?

In 1983, just as the band were starting to fall apart, The Clash decided to make a film. But stung by their experiences on the strange but compelling Rude Boy, they decided to make it themselves. They called it Hell W10, filmed it on 16mm silent black and white film, and made the plot up as they went along. The result, understandably, was somewhat bizarre.

‘Let’s make a film!’ said Mick Jones in 2005. ‘We had no other agenda there than that. Everyone put in their time without thinking about it. That was what we did on our time off; we worked! It was totally Joe [Strummer]’s idea. He directed it, he shot it, he did it. And then it was gone. It didn’t even come out!’

Strummer believed the film was lost forever. In 1987, when it looked like he might carve out a new career for himself in the film world, he told an interviewer, ‘I have directed a film myself, a black and white 16mm silent movie and it was a disaster. Luckily the laboratory that held all the negative went bankrupt and destroyed all the stock, so the world can breathe again. I shot without a script. God knows what it was about. I’m the only other one that knew, and I’m not telling.’

In 2002, the film was rediscovered on video tape and re-edited by long-time Clash collaborator Don Letts, who added a fine Clash soundtrack over the top. It is a strange piece indeed, a gangster tale that follows Earl, a musician and small-time hood played by Paul Simonon, who falls foul of the local crime boss called Socrates, ‘The Lord of Ladbroke Grove’, played with some relish by Mick Jones, resplendent in white tux (‘You wanna end up as a pillar in a Canning Town flyover?’ he threatens one lackey). Strummer gives himself a cameo as a corrupt and racist policeman. It’s a cross between The Harder The Come and some of the pulp London crime novels of the 1950s (many of which have been republished by London Books).

Hell W10 also features some cracking period photography of Notting Hill, Paddington and Ladbroke Grove, and weighs in at almost 50 minutes, which suggests it must have taken quite some time to film.

What makes it particularly fascinating is that it was filmed just as the band were starting to go belly up; Topper Headon had already been kicked out for drug abuse, while Simonon and Jones were barely speaking, making their feud in the film a little too close to the truth. Things came to a head within weeks of Hell W10 being made, with Jones sacked from the band in September 1983.

In Letts’s documentary, Westway To The World, both Jones and Strummer confess that the band had simply spent too much time in each other’s company and should have taken a break; if they had done so, hotheads may have had time to cool. Instead, they made a film. Perhaps if they’d had a summer holiday in 1983 rather than fool around with a camera, the band of Jones, Strummer and Simonon might have lasted another few years. Still, it looks like they had fun making it.

Was it worth it? Watch and decide, this is the first of five parts.