Last winter, I went mudlarking on the Thames shore. This is an edited version of the article I subsequently wrote for Eurostar (image below from Knowledge Of London).

You’ll see them at low tide, wandering alone with bent necks along the damp and desolate mudflats of the Thames. These are the mudlarks: amateur archaeologists, beachcombers and scavengers who delight in rediscovering lost detritus from London’s past. Although they are wearing waders and carrying metal detectors, they look much like giant birds, storks or herons, as they walk with heads bowed and eyes fixed on the floor, scrutinising the mud and pebbles for hidden treasure. They’ll occasionally scratch at the surface with an extended toe if they see something they fancy. And then they’ll pounce, darting down to peck something from the ooze, before deciding whether to add it to the day’s hoard.

The tidal Thames has been described as ‘London’s largest and richest archaeology site’ and it’s certainly the longest in the country, stretching from the Thames Barrier to Teddington Lock. For centuries, the river in central London was used by boats bringing cargo from all over the world. Thousands of people worked in these docks and warehouses, and items that have fallen from boats or pockets or been casually discarded by Tudor dockers are still lodged in the London mud, waiting to be revealed whenever the tidal river withdraws.

Mudlarks have been prowling here for centuries. In Georgian and Victorian times, they were the desperately poor searching for things to eat or sell. By the 1960s, the term referred to unofficial archaeologists who formed the Society Of Thames Mudlarks in 1980. A few years later the Port of London Authority (PLA) – the body in charge of the river – offered the mudlarks licences to dig on the foreshore in return for having their finds officially recorded by the Museum of London. The mudlarks have thus helped build an unparalleled record of everyday life on a medieval river. 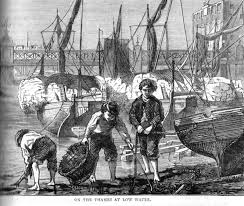 Ian Smith is one of them. His patch is the north bank of the Thames between London and Southwark Bridges, outside Customs House, where pre-Victorian cargo ships would have been checked for contraband. This was once the Pool of London, the main unloading point for boats that could not fit between the pillars of old London Bridge, and a place rich in treasures. ‘I started in 1973 as a schoolboy,’ says Smith on a bracing winter morning. ‘I grew up in Battersea and saw a TV show about a man who found these old clay pipes in the Bristol Channel. So I came down to see what I could find. I spent about a year working down the river bit-by-bit until I got to Blackfriars where I saw this group of people, a little cluster of them, and I went over with my collection of pipes. And where they’d been poking about there were pipes everywhere, loads of them, they were just ignoring them and looking for other stuff. So I started chatting and that’s how I got started.’

The thick black mud of the Thames conceals rich treats, everything from prehistoric flints to Victorian toys. The mud is anaerobic – without oxygen – so preserves just about anything. Kate Sumnall works for the Museum of London and the Portable Antiquities Scheme as a Finds Liaison Officer; it is her job to manage the licence scheme and register everything the mudlarks find. She says, ‘London is different to most places in terms of the preservation and the proportion. You wouldn’t get iron daggers in a field, it would be eroded, but Thames mud is anaerobic so things don’t decay. And you also don’t have aggressive chemicals and ploughs, which damage items in the ground. You can still find medieval leather in the Thames.’

Smith believes the Thames has three other benefits. ‘London is almost unique,’ says Smith. ‘Most rivers aren’t tidal, so that’s one thing, but you’ve also got the river going through the centre of town rather than round the outside. And the third thing is that in the Victorian era all the docks got moved over to the Isle of Dogs, so that means the early stuff has been left in the ground rather than dredged away centuries ago.’

This is what makes the Thames such a popular and lucrative haunt for the mudlarks. There are around 50 with official permits, granted by the PLA after an individual has spent at least two years on the foreshore getting experience and demonstrating a history of recording their finds. ‘The mudlarks have huge value,’ says Sumnall. ‘They have sold us entire collections in the past and these have gone on to form a crucial part of the museum. But they are also immensely helpful in recording where things are discovered over time, which helps build up a bigger picture of London history.’

When Sumnall is contacted by somebody who wants to be a mudlark, she’ll often put them in touch with Smith, who has an unrivalled knowledge of the river and its secrets, knowing where to look and when. At low tide, he clambers down the steps on to the foreshore carrying the tools of his trade – a bucket and spade and a battered metal detector wrapped in waterproof plastic – to begin his hunt. After just a few minutes he returns with a 13th-century arrowhead, 16th century pipes, medieval buttons and a shard of Tudor pottery. But this is bric-a-brac to an experienced mudlark. Smith, an antiques dealer by trade, specialises in medieval pewter pilgrims badges which were sold at points of pilgrimage, but has found all sorts of things. ‘I found a hoard of forged coins from 1470,’ he says. ‘People would clip a bit of silver off the edges of coins and these forgers must have been chased so they flung the bag of coins into the river to get rid of it and I found it centuries later.’

London’s history as a world port dates back to the Roman era, which can make for interesting finds. Sumnall tells the story of a bone harpoon that they originally thought came from the Stone Age, but after carbon dating turned out to be from around 1650. ‘That really threw us, but we realised it came from a part of the foreshore where the whaling docks were located and it’s possible it came from an Arctic civilisation and arrived in London on a whaling ship. But obviously we can’t be sure.’ 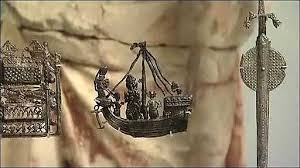 Another recent discovery was a 400-year-old lead toy coach, found by a London decorator, Albert Johanessen, who says his most important equipment is not a metal detector but ‘his eyes and a stout pair of wellies’. Smith possesses these, but after 40 years of mudlarking is realistic about what he’s going to find. ‘You’re never going to find treasure like the Staffordshire Hoard because nobody is going to bury gold in a river, but you find ordinary everyday stuff that people chuck away: tools, rings, badges, glass and pottery.’

You certainly find a lot of clay pipes. These carpet the foreshore in London, thousands of them dating back to the sixteenth century when tobacco was first introduced to the capital. The pipes were sold pre-filled and although they were reusable were often discarded, thrown into the river by those who worked in the docks. These 400-year-old fragments are fascinating to newcomers but to the trained eye are more like Tudor cigarette ends and rarely get taken to the museum to be registered.

But there is one Londoner who is interested. Jane Parker is a designer who last year began to collect pipes to make into necklaces and bracelets. She currently sells them on her website but hopes to get a stall at a London market soon. ‘I went to the Museum of London Docklands (in Canary Wharf) and afterwards walked to the river,’ explains Parker. ‘The tide was out so I went down on to the beach. I saw these clay pipe stems and decided I’d make something from them and started making them for friends who had left London as a momento.’

Parker doesn’t have a PLA licence, which means she can’t dig but is allowed to collect anything from the surface. With pipes that’s all she needs. At the right spot, Parker reckons she can pick up 400-500 usable pipe stems in an hour. ‘I want stems that have been pummelled by the tide, and are soft and worn at the ends. The smaller and finer, the newer they are. Some of them have a line down the middle that show they’ve been cast in a mould, while the bigger, chunkier ones are hand-made, the holes aren’t centred and they aren’t smooth.’

You can also see the fruits of the foreshore in a special display at the Museum of London devoted to items found in the river, covering everything from prehistoric axes to medieval skulls. The museum takes in around 1,000 items a year from the mudlarks and despite Smith’s belief that ‘the best times are over, so much has already been found’, Sumnell thinks there’s still plenty to discover. ‘We’re definitely finding different things,’ she says. ‘They heyday of the pilgrim badges may have passed but we’re seeing more Roman stuff than I can keep up with, especially in areas of heavy erosion. There’s still a lot of interest in mudlarks, and we’re always getting new ones.’ A new generation itching to uncover the secrets of the Thames.