Never mind the Balearics: London and the hippies of Ibiza, Formentera and Deia

I have a piece in the current issue of Uncut about the 1960s hippie scene in the Balearic islands of Ibiza, Formentera and Mallorca. It explores three individual but inter-related scenes – the community of artists and writers centred around Robert Graves in Deià, which attracted musicians such Kevin Ayers, Robert Wyatt and Daevid Allen; the hedonistic hippies of Ibiza; and the more hardcore scene on Formentera, that was filled with escapees from London and which had connections to Pink Floyd.

This is a circular tale. Following the arrival of expat Londoners in the 1960s, Ibiza continued to attract a wide range of European travellers throughout the 1970s, and the resulting spirit of chemical hedonism, opportunism and musical adventure eventually spawned Acid House. This came back to London in 1988 at clubs like Shoom, which were directly modelled on the mutant neo-hippie attitude that London DJs had experienced in Ibizan nightclubs. Although the piece concentrates mainly on the Soft Machine/Pink Floyd angle, the circular nature of this journey really interested me – the way a generation of elite London hipster helped transport a certain spirit to the Mediterranean, where it gestated into something quite different that a later generation brought home again. 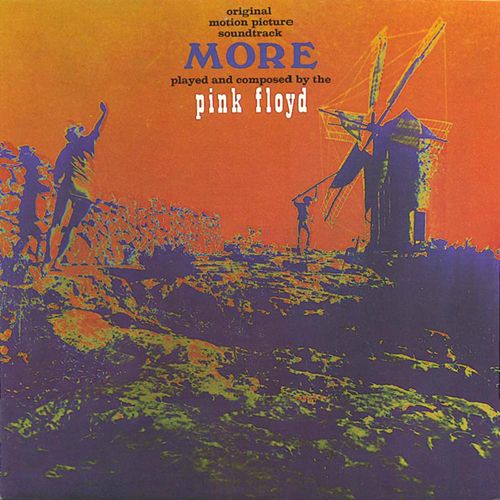 To get an idea of what life was like in Ibiza and Formentera in the 60s, you should watch More, the film by Barbet Shroeder which had a soundtrack by Pink Floyd. “The film More, that’s what made Ibiza famous forever,” said Jose Padilla, the DJ who founded Cade Del Mar. “That was it for me, the Ibizan white house with no water or electricity, hanging around knackered, guys from Vietnam, girls, there was a lot of heroin too. You can tell [Floyd] were doing a lot of acid… but the landscape must effect the music.” You should also listen to “Formentera Lady” by King Crimson, with evocative lyrics by Peter Sinfield, who often visited the island. As a result, there is now a street named after King Crimson on the tiny island.

Another Balearic-influenced 60s psychedelic classic is Cream’s “Tale Of Brave Ulysses”, with lyrics by the great Australian artist Martin Sharp that were inspired by his time in Ibiza and Formentera.

The Floyd crew spent time on Formentera in the 1960s, with Syd Barrett being sent there to recuperate following acid meltdowns, accompanied by the ever fascinating Sam Hutt, the hippie doctor who later became the country singer Hank Wangford. I’ve written about Sam’s West London hash clinic before. Aubrey Powell, co-founder of Denmark Street-based designers Hipgnosis, also spent much time on Formentera and told me how the island’s landscape influenced the artwork he later produced for Led Zeppelin and Pink Floyd – particularly the weathered sandstone that Syd Barrett would stare at while off his head on LSD.

Meanwhile, over in Deià, the scene that coalesced around poet Robert Graves helped influence Soft Machine and Gong. Graves was an extraordinary character, who straddles so many areas it’s difficult to know where to start, but was connected in several ways with music, drugs and a general spirit of inquisitive mysticism. I spoke to Graves’ Spanish son-in-law and son – both of whom are musicians.  I also talked to Gong’s Didier Malherbe, who lived for a while in a cave in Robert Graves’ garden, where he would practise his flute and talk to Graves about Greek mythology, while neighbour Daevid Allen took acid and dreamed up his Gong universe.

Among Graves’ many interests was a fascination with magic mushrooms – he corresponded with Gordon Wasson, the American banker who helped bring mushroom knowledge to the west – and both Soft Machine and Gong were hugely influenced by the psychedelic experience. Artists, writers, musicians and actors from London would often visit Graves, including Ronnie Scott – Graves was a regular at Ronnie Scott’s club whenever he was in London. Graves also spent time with Alan Lomax, the great musical folklorist.

Deià is now a mecca for rich Europeans, partly due to a huge luxury hotel owned by Richard Branson. The story behind this goes back to London in the 1970s, when Branson and his wife were having dinner at Branson’s Little Venice houseboat with Kevin Ayers and his wife. Branson had his eye on Ayers’ wife and in the spirit of the era, this canalside soiree soon turned into a swinging scene, with everybody swapping partners. However, Ayers and Branson’s wife Kristen then fell in love and ran off to Deià. Kristen later ran off again, this time with a German architect, who Branson promptly teamed up with to build the hotel that would destroy the town’s bohemian spirit forever, sending Ayers into further exile, this time to Paris.

While Ibiza/Formentera and Deià were largely separate scenes, there was the occasional crossover. One such was this album, Licors by Pau Riba. Riba, a Formentera-based musician and grandson of Catalan poet Carles Riba, recorded this excellent psych-prog album with Daevid Allen in Deià. Riba also recorded the strange, beautiful Catalan folk album Jo, La Dona I El Gripau, in a stone house on Formentera in 1971.