This piece was originally published in World of Interiors in December 2011.

James Watt was not a tidy man. Inside the Scottish engineer’s eighteenth-century workshop, shelves are thick with dust and overlapping objects of marvellous obscurity. It’s chaotic, but it is the past, a life perfectly preserved. Almost 100 years ago, this attic room was moved from Birmingham and reconstructed at the Science Museum, but the public have only recently been readmitted. It’s a delightful and very human sight. Unlike the modern scientist’s sterile laboratory, items are stuck to wall and floor, or piled harum-scarum on shelves, desks, tables, lathes and huge wooden machines of curious design. There are 8,434 objects all told, each lovingly listed on an exterior wall. Pincers, mallets, drawer knobs, hacksaws, charcoal, ladles, a frying pan, washers, broken thermometers, bent wire, drills, bradawls (six without handles), packages of chemicals wrapped in yellow paper and tied with brittle string, lumps of metal, fossils, half-finished statues, cogs, pieces of wood, barrels full of plaster of Paris and a clock key. There’s even, or so it says, a sea horse tooth. Nothing thrown away. This is the testimony of a life in science, and it looks exactly as Watt left it almost 200 years ago.

Watt was born in Greenock, Scotland in 1736. For several years, he quietly sold scientific instruments, musical instruments and toys from a shop in Glasgow but he had a curious mind and was an inveterate tinkerer. In 1776, he completed a steam engine that used a fifth of the coal of the existing engine. Factories and mines all over the country were soon powered by Watt engines as Britain surged into the steam-driven Industrial Revolution. Watt became a hero, as crucial to the national identity as Wellington and Nelson. On his death in 1819, he was the first engineer to have a statue in Westminster Abbey, although it was later removed as it was grotesquely large. His legend was international. In Japan, the state dispensed prints of Watt to promote the British values of industry, resilience and ingenuity that he embodied.

Watt began work on the steam engine in 1764 and moved to Birmingham ten years later taking with him the tools, fixtures and fittings he had accumulated in Glasgow. In 1790, he settled in Handsworth where he had his final workshop, a garret room where he could work undisturbed. In this dark space, Watt drilled, sawed and chiselled, experimented with chemicals, and developed a variety of extraordinary devices, including a perspective drawing machine, a letter-copying press and a sculpture-copying machine. He often had to make for himself the tools he needed for his inventions, including what Science Museum curators think is the oldest circular saw they’ve ever seen. The impression gained is of somebody who loved using his hands, and was always looking for ways to improve production, to make more things, and faster. He was a solitary soul. To ensure he could work without interference, Watt built a shelf outside the door on which the maid could leave his dinner. When he was ready, he would bring it inside and warm it on the stove. There’s a hint of sadness too. In one corner lies a chest full of things that belonged to his son Gregory, who died of tuberculosis in 1804. It seems Watt kept it here, close by, for 15 years until his own death.

At which point, the door was closed and the room left untouched. Even as the house was occupied by new families, the workshop was kept as Watt had left it for more than a century, with drawers full of half-made thermometers wrapped in wax paper and surfaces strewn with rusty hinges. It became a shrine. One visitor commented, ‘the dust lay so thick it was like walking in soft snow’. One pilgrim was Bennet Woodcroft, who ran the Patent Office Museum, part of the South Kensington Museum. Woodcroft was acquiring key artefacts from the Industrial Revolution and in the 1860s registered an interest in the room. However, it was not transferred until 1924, by which time Woodcroft was dead and the Patent Office Museum had become the Science Museum.

They took everything– not just the furniture and contents but the floorboards, door, window frames, fireplace, stove and flue – and reconstructed them on the ground floor of the museum. Workman even asked if they should remove the dust. The public would peer through a window above Watt’s workbench and observe a scene almost identical to the one painted by visiting artists in 1864 and 1889. But by the 1970s, it had become a museum relic. The room was moved to the mezzanine, where it was ignored for another couple of decades before being ignominiously boarded up. Staff could still reach it if they took the wrong door out of the admin office, but the public would never know it was there. 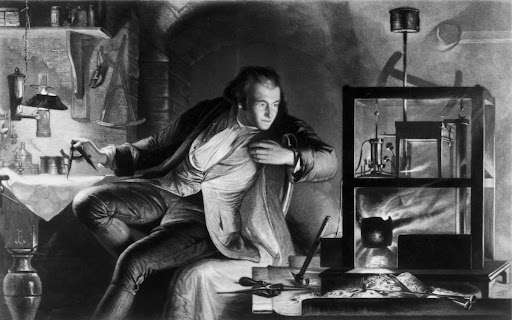 So it remained until earlier this year, when the room was returned to the ground floor and made the centrepiece of an exhibition that examined Watt’s life in the context of the Industrial Revolution. In an act of domestic archaeology, objects were removed from drawers where they had been invisible for centuries as curators resolved to explore every nook and cranny. These were then replaced exactly where Watt had left them.

The exhibition shows that Watt was a scientist but also a workman, constructing by hand the very machines that made mass production possible. Years later, William Morris would reject the industrialised world that Watt had created, but the two had something in common in their love of forming things by hand. However, Watt’s inventions meant things no longer had to be created at such labour and expense, and people could choose for themselves the design and furnishing of their home rather than rely on what was passed on to them by their forefathers. It was the start of the consumer age, making Watt was partly responsible for many of the decorative items that can be studied at length next door at the V&A Museum. When Woodcroft visited Watt’s workshop, this relationship between industry and design would have been more apparent. The South Kensington Museum was essentially the Science Museum and the V&A combined, and had been created partly to inspire the working class with technique as well as design, showing not just beautiful objects but also how they were made. Now cause and effect, science and art, are divided by the bustle of Exhibition Road. But enter Watt’s workshop, and just for a moment the two become one.