South London and the birth of the educated footballer

Whitgift School in Croydon is not the sort of place you’d expect to find the future of English football. This breeding ground for bright young talent is as far from the stereotypical back streets of football’s urban north as you can get. Situated in 45 acres of parkland and boasting colonies of albino wallabies, flamingos and red squirrels, Whitgift School is one of the oldest and wealthiest private boys schools in the country. For centuries, it has produced outstanding academics and sportsmen. The latter have usually been rugby players such as England fly-half Danny Cipriani or cricketers (the county-standard pitch is used by Surrey CC), as befits the tradition of the English independent school, which  leaves football to the hoi polloi of the comprehensive sector.

So how have four professional footballers emerged from Whitgift’s ranks in the past few years? Why does the school currently count 13 children from different footballing academies – including Chelsea and Tottenham – among its 1,200 pupils? And how did the school attract three former footballers to work on its coaching staff? 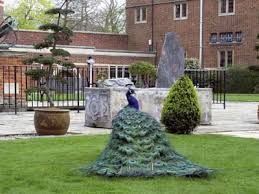 To answer those questions, I entered the headmaster’s study to meet Dr Christopher Barnett, the man who brought soccer to Whitgift. As we talk, exotic peacocks can be seen through the study window, heads bobbing up and down as they wander around on impeccable lawns. It is an extraordinary environment. In these conditions, Dr Barnett’s belief he can ‘change the mould and develop a new breed of middle-class footballer’ seems entirely plausible.

Convinced that if something is worth doing, it’s worth doing properly, Dr Barnett looked for a coach and found Colin Pates, the Chelsea and Arsenal centre-back, who had retired with a knee injury. A posh school in the suburbs is not where you’d expect to find a hard-bitten former pro, and Pates admits: ‘Whitgift is quite alien to some of us, because we had state school educations. It was intimidating, and not just for the boys.’ But he jumped at the opportunity.

‘The headmaster asked me to take a sixth-form team on Wednesday afternoons,’ he says. ‘I asked if there were any goalposts, pitches, teams or even footballs, and we didn’t have anything. So we had to start from scratch, pretty much teach them the rules. They were rugby boys playing football, so these were quite aggressive games. But after three years we introduced fixtures and we’ve never looked back.’

Introducing football to a rugby school for the first time in 350 years was no easy task and Pates admits that ‘there was always a concept that we’d bring in swearing and fighting, but we’ve had none of that. History told me it was going to be very difficult to change people’s attitudes, but if you know you’ve got the support from the top man, the head, you can slowly change the perception of football.’ And the Headmaster – motivated by ‘old-fashioned esprit de corps’ as well as the desire to have the newly fashionable sport of football on the syllabus – gave it his full support.

As football cascaded through the school, the coaching team expanded to include John Humphrey, a right-back for Charlton and Crystal Palace, and Steve Kember, the former Chelsea and Palace midfielder. ‘It showed that we were engaging with how we would be a football school, but a different kind of football school,’ says Dr Barnett. ‘What I wanted to do was provide discipline and a serious education. We wanted to tell footballers who were coming to Whitgift: “Yes, but…” and the “but” is that you are going to work.’

The coming of Moses

Whitgift began to offer scholarships and bursaries to help parents of talented young players pay the £13,266 annual fee. It also established an informal relationship with Crystal Palace, with some of the club’s outstanding talent getting recommended for places at the school. David Muir, Education and Welfare Officer at Crystal Palace, explains ‘Whitgift is flexible and open-minded,’ he says. ‘Private schools are generally better than state schools at supporting the academies, offering excellent sports training and balancing that with academic work.’

By 2007, two Whitgift pupils (Victor Moses and Lee Hills) were in the Palace first team. But education was still paramount. ‘A lot of these boys are outstanding academically even if some of them can come here with what appears to be a relatively low IQ,’ says Dr Barnett. ‘But if you work with them and give them belief and encouragement, they can soar.’

Moses, now playing in the Premier League with Wigan, arrived at the school as an 11-year-old orphaned asylum seeker from Nigeria predicted to get no GCSEs at A-C and ended it as an England youth international with GCSE results above the national average. Dr Barnett is adamant that a good education and football skills are mutually beneficial. ‘We did a correlation study on pupils’ academic expectation on entry and then factored in how much they participate outside the classroom,’ he says. ‘And those boys that were more heavily involved in sport did far better academically – quite the reverse of what you might expect. Received wisdom is that if you do too much sport, you’ll damage their education, but that wasn’t the case.’

As for what education can do for your football, he cites the words of an FA Cup-winning manager, who watched Whitgift win the Schools Cup in 2005, when they beat Healing School 5-0 (Moses scored all five). ‘Lawrie McMenemy said to me that if he’s got a choice between a footballer without a brain and a footballer with a brain, he’ll always go for the one with a brain, because he knows he’ll follow instructions and understand tactics and you’ll get far more from him.’

It is this that will provide the new type of footballer desired by Dr Barnett. ‘You know that if they were in the state sector they would get lost. Football would be all they had and they’d probably end up with nothing, no career and no qualifications; here, they can end up with 10 GCSEs and still make it as a footballer. And that is one of the key differences in how they will conduct themselves on the pitch  and what image they provide for football. If you get enough kids doing this, you could change things.’

The movement is gathering place. Other private schools – including local rival Trinity and Ardingly College in Sussex – have started to follow Whitgift’s lead.

So how does Whitgift recruit its talent? Muir says that ‘Palace put forward one or two players every year. We have to find kids who are both outstanding footballers and with a potential to do well academically because they have to pass the entrance exam. The parents pay the fees, though they can be helped by scholarships or wealth-related bursary schemes.’

Other relationships are less formal, and sometimes clubs foot the fees. And sometimes, the players are already at Whitgift before the clubs spot them such as Stefan Amokwandoh, a 13-year-old at Charlton.

A close relationship between school and academy is vital. The school’s fixtures are played midweek to avoid clashing with academy games, while academies benefit from the high standard of coaching the players get from the school.

Whitgift insists that all pupils play in school fixtures, compete in all sports and do their homework. ‘I have to work harder than the other boys at Chelsea,’ says Joel Witele, a 14-year-old who also excels at rugby. ‘When I get homework I have to concentrate and make sure I do it.’

For those football academies accused in a recent book (‘Every Boy’s Dream’ by Chris Green) of offering too many boys nothing but disappointment and educational underachievement, you can see why Whitgift is so attractive.

The notion of privately educated footballers no longer seems strange to Pates and Humphrey, even if it must to some of the school teams they come up against (‘We played a local state school,’ said Pates, ‘and one kid said: “Look Sir, no litter!’). Humphrey says: ‘We have quite a few guys at Charlton [where he is an academy coach] who go to private schools. If you have two boys of the same ability, you pick the brighter one because they’ll learn quicker, so we’re moving away from state schools monopolising football. There’s a lot of money out there, and parents want to give their kids the best education they can.’

Pates agrees: ‘A lot of footballers are sending their kids to independent schools. Working-class parents are earning money and putting their kids through private school. We’ve had [Brentford manager] Andy Scott’s boy here, Ian Wright’s boy, Steve Coppell’s – there are lots of them and its spreading into football.’

Muir concurs: ‘It’s great to see the kids get an opportunity I never had. It’s not what people might perceive of from an independent school, it’s not a bunch of boys with plums in their mouths, it’s just normal kids whose parents want them to do really well and provide them the best opportunity to do so.’

Another motivation for Pates and Humphrey is the experiences they had as players. ‘A lot of players from our generation had nothing to fall back on when they came out our game,’ says Pates. ‘There was also nothing in place when we were young – if you didn’t make it, that was that. So we ensure that our players have the opportunity to be everything they want to be, even when they leave. Rhys Coleman was released by Charlton, went to Glenn Hoddle’s academy in Spain and didn’t quite make it, so we got him a trial with Palace. It’s like aftercare. We try and help.’ Another former pupil managed to put himself through university with the money he earned from semi-professional football.

It’s all part of a package that Pates and Dr Barnett believe to be unprecedented. ‘You have to be an exceptional footballer to make it these days,’ says Pates. ‘So we want to give them the best opportunity to be a footballer, but also give them a magnificent education so if they don’t sign scholarship forms they have something to fall back on. It works for us, it works for the academies and it works for the families.’

The question now is will it work for football.