‘What a bounteous banquet of costly viands is spread before an ardent-minded, grateful-spirited Perambulator!’ Old Humphrey’s Walks In London

‘One must perambulate early and late in all weathers, to know a little about London’. The London Perambulator

London is a gift for those who wander. Sometimes you can pick a new area and just stroll wherever the whim strikes you; sometimes you can take a different route between two familiar destinations. Either way, you’ll find your appreciation of the city is inordinately increased.

There is a healthy industry in London walking – M@ recently compiled a list of his ten favourite for the Guardian – but if you need something cheaper and more challenging, you can always take a self-guided walk over a longer distance. I once walked the Thames from St Paul’s to Hampton Court on a Sunday afternoon, criss-crossing bridges and sticking as close to the river as possible. It was particularly satisfying to see how easy it is to walk on the river bank – the only place I had to take a significant detour was around the ever-weird Chelsea Harbour.

In a similar vein, a couple of books have recently come out on the theme of London walking. Walk The Lines is about Mark Mason‘s decision to walk every tube line in London, above ground, an overall distance of 403 miles that takes him everywhere from Amersham in the north-west and Epping in the far east to Morden in the deep south.

Mason enjoys discovering new parts of the city and peppers his book with brilliant London trivia but is at his best when writing about the pleasure walking can provide. As he writes, ‘Once you’ve caught the bug, you feel an urge to plan your walks, be it thematically, geographically or by some other means. There must be a raison d’être for your ramble.’ This, he thinks, taps into a similar mentality to that of a collector: ‘It’s not about studying, about observing or noting. It’s about collecting. About claiming the city’s greatness, or at least some small part of it, for yourself.’

Mason’s book is a fun read, but you couldn’t very well use it to walk the tube lines yourself, even if you were lunatic enough to want to do so. Tom Bolton’s London’s Lost Rivers, however, bills itself as ‘A Walker’s Guide’ and is a terrific mix of history, topography and practicality. It maps – astonishingly diligently – the courses of eight of London’s buried rivers, so walkers can follow them for themselves, pointing out items of interest they can see along the way while also offering some historical context about the subterranean rivers.

Along with Nicholas Barton’s The Lost Rivers of London, it’s essential for any fan of buried rivers (Diamond Geezer says much the same here). The atmospheric Polaroid photographs by SF Said are a nice touch, as is the introduction by the great Londonphile Chris Fowler. Highly recommended.

Continuing a bookish theme, a couple of current and forthcoming releases have caught my eye.

First is ‘London’s Lost Rivers’ by Paul Talling and published by Random House. This is the first serious update of Nicholas Barton’s classic 1950s underground river book and it will be interesting to see what new information about the Fleet, Effra, Westbourne et al that he has uncovered.

The second has been catching my eye in the window of Herne Hill Books every time I walk past it. ‘Jamrach’s Menagerie’ is a novel by Carol Birch published by Canongate.  This is a novelised account of the famous occasion a bengal tiger escaped from London petshop Jamrach’s. It was from this shop that the animal-loving artist Gabriel Dante Rossetti probably purchased the pet wombat, whose death left him so bereft. 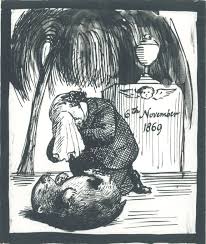 Incidentally, if any publishers are reading this and fancy sending me London-themed books to add to my collection, my conscience would have no hesitation in happily accepting them.