This original appeared in the Spring/Summer issue of Waterfront, the Canal & River Trust’s excellent magazine for supporters.

Canals haven’t only recently embraced the leisure industry. As early as 1801, passenger boats ran from Paddington to Cowley in Uxbridge along the newly opened Grand Junction Canal, stopping at various points between including “several Nobleman and Gentleman’s Seats, Villas and Country Residences”. The Paddington Packet boat took three hours and was pulled by four horses. For many, it was a relatively quick route into London as well as a fun day out and an illustration from 1801 shows a jolly boat party with dozens of Georgian gentlefolk carrying parasols and wearing top hats. The full journey cost 2s and passengers could bring luggage. People could also hire boats for private trips, including ones “sufficiently capacious to accommodate conveniently from One to Two Hundred Persons”. 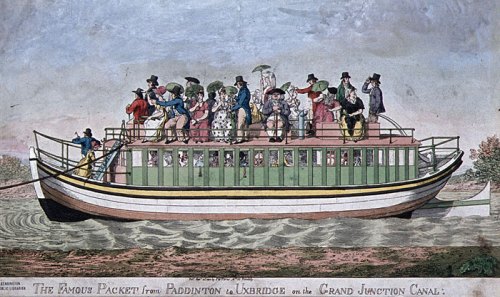 Boats initially ran both ways every morning and afternoon, but this changed as time went on. The service also switched from widebeams to narrowboats after six months, when it was taken over by Thomas Homer, a speculator who helped build the Regent’s Canal. Boat crews were noted for their jaunty blue uniforms with yellow capes and yellow buttons, which makes them sound a little like Bananaman, and passengers could get tea or coffee.  Following the construction of the Regent’s Canal, the service travelled as far as Camden but closed when it could no longer compete with faster coach services.