London’s new invasive species, and how the Daily Mail has welcomed them to the city

This piece first featured in the April issue of Metropolitan. Interestingly, the Daily Mail had not discovered the aesculapian snakes when I wrote this piece but did so very shortly afterwards. I sincerely hope my article was not what alerted them to this harmless colony.

When workers began clearing the Hackney site that was to become the 2012 Olympic Park, one of the biggest problems they faced amid polluted soil and world war explosives came from a plant. Japanese knotweed is a scarily resilient and fast-growing weed that infested the waterway and removing it was a laborious process that began with chemical treatment before the dense root structure was dug out. Next came cutting, hand-sorting, incineration and burial of the remains inside a welded physical membrane on landfill sites in five-metre pits. Only after this was the plant, introduced by Victorians because it looked pretty, deemed safe. It cost £70m.

London is home to around 76 such ‘invasive species’, leading to the creation of the London Invasive Species Initiative, which monitors those alien invaders that have found a predator-free London life to their liking, causing serious damage to the city’s ecosystem even if they add an exotic splash to the urban landscape. Many, like the knotweed, arrived in the 19th century. “There was a flowering of ‘acclimatisation societies’, which were specifically set up to introduce new species,” says Tim Blackburn of the Zoological Society of London. “The Zoological Society envisioned a golden age where we would have herds of elands [African antelopes] roaming the south of England. But the impacts are pervasive and affect so many aspects of life.’

But not every alien species is dangerous and London is home to hundreds of non-native species that merrily co-habit with London’s longer-term residents. “There are many species we think of as part of our national heritage that were originally non-native,” points out Alex Robb, a London Wildlife Trust warden, in defence of the ring-necked parakeet, which has adapted to London life so successfully it has been adopted as the country’s first naturalised parrot. It is unlikely, however, that Japanese knotweed will ever be regarded so warmly. 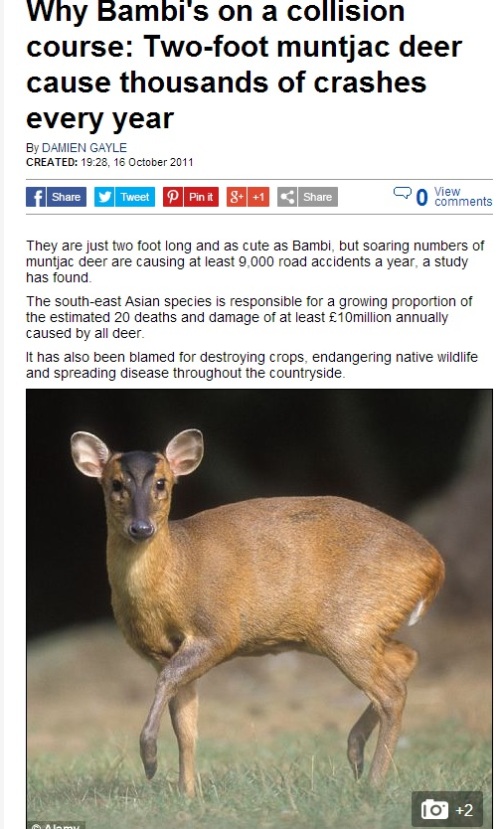 For centuries, London parks have contained red and fallow deer, generally doing little other than giving dogs something to bark at. Now there’s also the muntjac deer, introduced to Britain in the 19th century. As muntjac began escaping from zoos or were deliberately released, the population expanded to today’s 2 million. The muntjac is small and shy, with stubby antlers and an unappealing call that sounds like a smoker’s cough. It can usually be seen in north London suburbs munching roses, but some have been spotted as centrally as Bethnal Green and they have an annoying habit of running into the road, causing accidents.

Japanese knotweed was introduced by Victorians as an ornamental plant. Big mistake. The bamboo-like plant is one of the country’s most invasive species with a frightening rate of growth – up to 10cm a day to a height of three metres and with a root system (rhizome) that can expand seven metres in all directions. It’s persistent too. It can push through cracks in cement and tarmac, and has been known to grow through floorboards, wrecking houses. Knotweed is devilish to remove, requiring intensive herbicide treatment and even then, freakishly, a new plant can spring from a fragment of rhizome the size of a fingernail that’s lain dormant for 20 years. The problem is so great some banks refuse to give mortgages to properties that have knotweed within sight of the walls. The good news? A predatory insect has been shipped in from Japan that’s meant to control the triffid. Another alien species introduced from overseas – what could possibly go wrong?

Red-eared terrapins
Originally from: The Americas
Now found: Regent’s Canal and other waterways.
Daily Mail headline (after related scare in Lake District): Terrapins That Can Bite A Child’s Finger Off Are Being Dumped By Owners, August 2013

Terrapins arrived during the brief but annoying Teenage Mutant Hero Turtle craze of the 1990s when parents bought baby terrapins for demanding children but then dumped the creatures in the nearest pond when playground tastes turned to Pokemon. These red-eared terrapins love London lakes, with meals of fish and ducklings helping them grow to around 30cm. Terrapins can live for 40 years and while it was believed London would prove too cold for them to breed, a baby terrapin was spotted in Regent’s Canal in 2013. Will warm summers may see a generation of even tougher, London-born terrapins take over our waterways? Worse still is the American signal crayfish, an armour-plated monstrosity that was introduced in the 1970s, escaped and set about annihilating the native white claw crayfish. Fortunately, the signal crayfish has one predator, “Crayfish Bob”, who has turned the epidemic into an opportunity, serving Thames-caught crustaceans at pop-up restaurants around London. 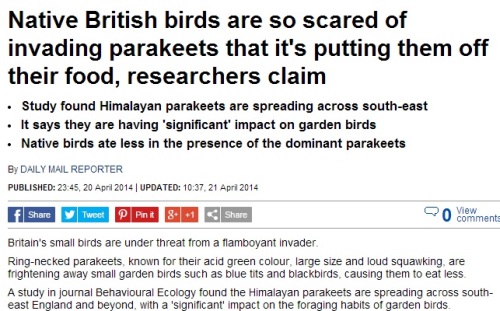 There are several legends about how shrieking flocks of green parakeets came to colonise south-west London. The most popular is that they are descendants of a pair released by Jimi Hendrix while he lived in Notting Hill. Another is they escaped from Shepperton while The African Queen was being filmed in 1951. Or maybe they fled from exiled King Manuel II of Portugal’s Fulwell aviary in the 1920s. The population has rocketed since the 1990s, when flocks were concentrated around Esher, Richmond and Twickenham. Mobs of noisy parakeets are everywhere, and the splendid ease with which this hardy, convivial, colourful bird has adapted to London life has made it increasingly popular among Londoners.

Oak processionary moth
Originally from: central and southern Europe.
Now found: Kew and across south-west London.
Daily Mail headline: Rise Of Poisonous Caterpillar That Can Cause Lethal Asthma Attack Is Unstoppable, May 2012

It’s the caterpillars you have to watch. These hairy toxic insects arrived in London in 2006 on imported oak trees and established colonies around Kew. While the caterpillars can damage oak bark, they are also a pain for humans thanks to 60,000 poisonous hairs that irritates skin, eyes and throats, or provoke allergic reactions. Fears were raised by newspaper that the caterpillar would cause carnage during the 2012 Olympics but fortunately this came to nothing. The pest has spread from Ealing, Richmond, Brent and Hounslow to Bromley and Croydon. 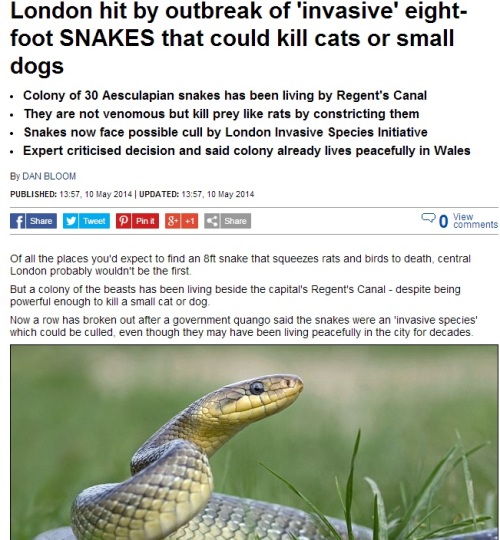 While the aesculapian snake is common in mainland Europe, London only discovered its colony in around 2007, when several were found in Regent’s Park alongside the canal near the zoo. Nobody knows how the snakes got there, but they are the first examples of non-native snakes breeding successfully in the wild in London. The snake can grow to 3-4 metres and is harmless to humans – although they can bite – developing instead a fondness for rats, of which London has plenty.

Police with taser guns were called to south-east London in March 2005 when a man was attacked by a huge black beast. ‘I could see these huge teeth and the whites of its eyes just inches from my face,’ he said. ‘I believed it was trying to do some serious damage.’ The “Beast of Sydenham” was seen again in 2009, chasing a jogger through Dulwich Woods, but has since gone quiet. While such stories often turn out to be nonsense – the Essex Lion of 2012 was a large ginger cat – strange mammals, escaped from zoos, farms and private menageries, do turn up in London, most recently two wallabies in Highgate Cemetery and an American mink in Thamesmead.