Fatberg at the Museum of London

After the latest fatberg was discovered in London’s sewers in Whitechapel in September 2017 – a 130 tonne monster that covered 250 metres – the Museum of London moved fast. While most of the fatberg was broken down by spades and high-pressure water and then converted to biodiesel, the museum was able to preserve two smallish sections for analysis, conservation and display. Fatberg! duly opens at the Museum on Friday February 9 and runs until July 1. It’s a terrific example of a museum thinking on its feet, responding quickly to events and then producing a short, snappy display that covers an important topic without resorting to hectoring or over-thinking. It covers the environmental impact and what can be done to reduce fatbergs without lecturing or wagging fingers, but also shows that London is facing a growing problem that people need to be aware of before they flush anything down the loo.

There isn’t a great deal to see, which isn’t a bad thing. There are some displays explaining precisely what a fatberg is, why they are problems, how they are formed and why the museum decided to collect a sample – apparently because they are “disgusting, fascinating things which mark a particular moment in London’s history”. The museum also proudly announces that ‘there is no precedent for collecting a fatberg”. Thames Water are co-sponsors and there’s a short video, some photos of the sewers, the tools and hamzat suit used by workers who have to break down and remove the obstruction, samples of biodiesel and then two chunks of fatberg themselves. One has broken into smaller pieces, the other is a solid and fairly hefty piece of native London fat.

Although I was slightly disappointed I couldn’t take home a small slice of fatberg for the mantelpiece, having to settle instead for some fatberg-branded fudge and a book about sewers, I was able to talk to somebody who’d handled the real thing. Andy was involved in the scientific analysis. He touched the fatberg when it was first retrieved from the sewer and says it was greasy and waxy, but has since dried to the consistency of a pumice stone and also lightened in colour as the moisture has evaporated. It’s also very light. Andy showed me photos of the museum’s fatberg sample from soon after its recovery – it was originally brown and damp, like dinosaur poo, with finger marks where people have prodded it.

The fatberg is 62%, of which 53% is the palmitic fat found in cleaning products and olive oil. The remaining 38% is 19% ash and grit, 10% water and 9 % other, which presumably includes solids such as wet wipes, nappies and condoms – all of which are a major problem for our sewers. London has suffered from an increase in fatbergs in recent years because of the age of our sewers, our changing habits, a growing population, carelessness and also possibly the fact we don’t use that much water – Americans apparently use three times as much as us – so there is less chance to flush away deposits or dilute them.

Nobody seems to know how precisely a fatberg forms or how long it takes for one to develop. Andy told me that a scientist at Cranfield University is hoping to raise sufficient funds to construct a replica London sewer where she can grow her own fatberg. This seems a wholly worthwhile enterprise and one I fully endorse. Until then, we’ll have to make do with studying the dried remains of London’s fatberg at the Museum of London.

Fatberg! at Museum of London until July 1. 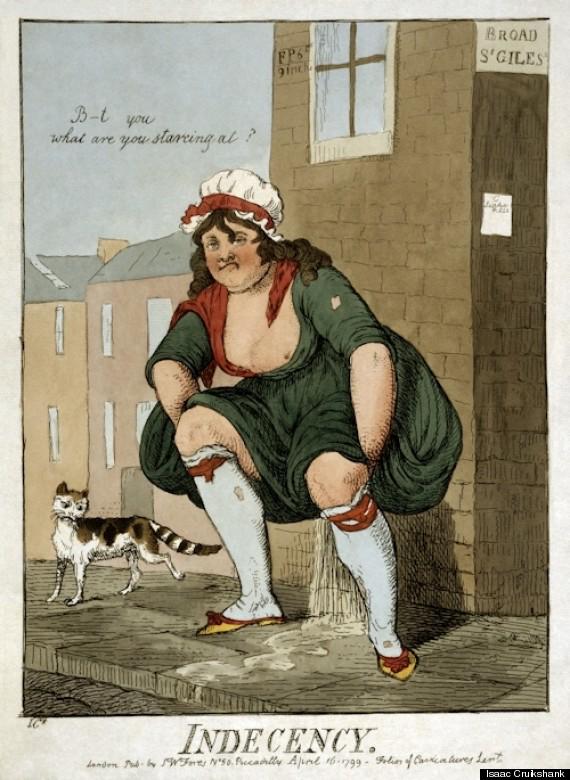 There is one of these just around the corner from where I live.

It’s long, thin, green and old and thrusts straight into the air like a giant’s, er, finger. It’s not a telegraph pole – there are no wires coming off it – and it’s too tall to be a broken street lamp.

It is, in fact, a stink pipe, one of four such items of street furniture that can be found within a half-mile radius of Brixton Water Lane. These stink pipe were built around the same time as London’s Victorian sewer network in the 1860s and are basically just huge hollow pipes that allow potentially lethal gas to escape into the atmosphere, far above the rooftops.  They often seem to located near the locations of culverted rivers – these ones are found more or less on the route of the Effra or its tributaries – suggesting that when these rivers were incorporated into the sewer system, they required some sort of additional safety valve (the buried Fleet famously exploded at King’s Cross after just such a build-up of gas in 1846).

Some stinkpipes are rather elaborate, but the ones I’ve seen around Herne Hill and Brixton are pretty basic and utilitarian. If you want to find some finer examples, like the fine crowned stench pipes of Kennington Cross, you should check out the excellent London Stench Pipes blog, which is devoted to these marvellous oddities leftover from Victorian London.