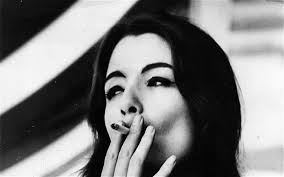 Bowie, Burroughs and the stage production of Ziggy Stardust

In December 1973, Rolling Stone journalist Craig Copetas brought together David Bowie and William S Burroughs in London for an interview. The piece was published in February 1974, around the time Burroughs returned to America, having finally had enough of the English climate and licensing laws. A wonderful photograph by Terry O’Neill captures the two icons together.

The interview itself isn’t quite as captivating. Bowie had only read one of Burroughs’ books (Nova Express), while Burroughs had only listened to two of Bowie’s songs (“Five Years” and “Starman”). This is my favourite exchange:

Burroughs: What is your inspiration for writing, is it literary?

Bowie: I don’t think so.

Burroughs: Well, I read this “Eight Line Poem” of yours and it is very reminiscent of TS Eliot.

During the two-hour conversation in Bowie’s home, Bowie did most of the talking. At one point he discusses in length his plans for a theatrical or television production of Ziggy Stardust, which had been released two years before (and in June 2012 celebrates its 40th anniversary).

It’s worth repeating this section in full, as it is one of the fullest explanations of the story behind the Ziggy concept.

Bowie: Nova Express really reminded me of Ziggy Stardust, which I am going to be putting into a theatrical performance. Forty scenes are in it and it would be nice if the characters and actors learned the scenes and we all shuffled them around in a hat the afternoon of the performance and just performed it as the scenes come out. I got this all from you Bill… so it would change every night.

Burroughs: That’s a very good idea, visual cut-up in a different sequence…. Could you explain this Ziggy Stardust image of yours? From what I can see it has to do with the world being on the eve of destruction within five years.

Bowie: The time is five years to go before the end of the earth. It has been announced that the world will end because of lack of natural resources. Ziggy is in a position where all the kids have access to things that they thought they wanted. The older people have lost all touch with reality and the kids are left on their own to plunder anything. Ziggy was in a rock-and-roll band and the kids no longer want rock-and-roll. There’s no electricity to play it. Ziggy’s adviser tells him to collect news and sing it, ’cause there is no news. So Ziggy does this and there is terrible news. “All The Young Dudes” is a song about this news. It is no hymn to the youth as people thought. It is completely the opposite.

Burroughs: Where did this Ziggy idea come from, and this five-year idea? Of course, exhaustion of natural resources will not develop the end of the world. It will result in the collapse of civilization. And it will cut down the population by about three-quarters.

Bowie: Exactly. This does not cause the end of the world for Ziggy. The end comes when the infinites arrive. They really are a black hole, but I’ve made them people because it would be very hard to explain a black hole on stage.

Burroughs: Yes, a black hole on stage would be an incredible expense. And it would be a continuing performance, first eating up Shaftesbury Avenue.

Bowie: Ziggy is advised in a dream by the infinites to write the coming of a starman, so he writes “Starman”, which is the first news of hope that the people have heard. So they latch on to it immediately. The starmen that he is talking about are called the infinites, and they are black-hole jumpers. Ziggy has been talking about this amazing spaceman who will be coming down to save the earth. They arrive somewhere in Greenwich Village. They don’t have a care in the world and are of no possible use to us. They just happened to stumble into our universe by black-hole jumping. Their whole life is travelling from universe to universe. In the stage show, one of them resembles Brando, another one is a Black New Yorker. I even have one called Queenie the Infinite Fox.

Now Ziggy starts to believe in all this himself and thinks himself a prophet of the future starman. He takes himself up to incredible spiritual heights and is kept alive by his disciples. When the infinites arrive, they take bits of Ziggy to make themselves real because in their original state they are anti-matter and cannot exist in our world. And they tear him to pieces on stage during the song “Rock ‘n’ Roll Suicide”. As soon as Ziggy dies on stage the infinites take his elements and make themselves visible. It is a science fiction fantasy of today and this is what literally blew my head off when I read Nova Express, which was written in 1961. Maybe we are the Rodgers and Hammerstein of the seventies, Bill!

Burroughs: Yes, I can believe that. The parallels are definitely there, and it sounds good.