Secret London: inside the Black Museum

I first read about the Black Museum when I was a boy, a macabre museum run by the police filled with artefacts taken from their most gruesome cases. I always wanted to visit, but the museum was out of bounds to the public. When I was at Time Out, I asked the Met to let me write about the museum and after some badgering – and to my great surprise – they finally agreed. The result was not quite what I expected. There is an interesting coda to this piece. Upon publication, the press officer phoned me to say how disappointed they were with the tone of the article; at exactly the same time, the Curator sent me an email saying the piece was the best description of the museum he had read. Make of that what you will…

The Curator pulls open a drawer full of shotguns. ‘Which of these are real and which are replicas?’ he asks. I nervously peer inside.
‘Too late,’ he says. ‘You’re dead.’

Welcome to the Black Museum, the Met Police’s private memorial to  London’s worst crimes. The public isn’t allowed inside, and after a half-hour tour, I wish I hadn’t been either.

Death masks and weapons from the Black Museum

The Black Museum (renamed the Crime Museum after complaints from officers in areas with large ethnic minority populations) has been one of the world’s most macabre and inaccessible museums for over a century, acquiring a certain infamy among hardcore Londonphiles and the sort of people who spend their spare time reading ‘The World’s Greatest Serial Killers’.

The museum is closed to the public but, after repeated requests, The Curator has allowed Time Out inside, albeit under duress that he makes no attempt to disguise. From his office in Scotland Yard’s Room 101 (and who says the police have no sense of humour?), where the walls are covered in police badges from forces around the world and shelves stuffed with books such as, er, ‘The World’s Greatest Serial Killers’, The Curator – two parts John Thaw to one part librarian – lays down the law. He doesn’t want to be named or photographed, and if the piece results in people phoning him up to try to get access to the museum, well, he’ll hold me responsible.

Ground rules established, The Curator unlocks the door, and the tour begins. The Crime Museum has been at Scotland Yard since 1874, moving with the Met from Whitehall to Victoria Embankment in 1890 and then Victoria Street in 1967. It was set up by Inspector Neame after an 1869 law allowed the police to retain prisoners’ property for ‘instructional purposes’. Neame felt it was important that police officers could see the tools of the criminals’ trade – a function the museum still fulfils today – and gradually built up the museum’s collection.

In 1877, a reporter from the Observer was refused entry and wrote about Scotland Yard’s ‘black museum’. The name stuck, and the museum became a popular destination for Victorian celebs: Gilbert and Sullivan, Sir Arthur Conan Doyle, Harry Houdini and Laurel and Hardy all had a ghoulish gander.

The room we enter has been mocked up to resemble the original Whitehall museum, with a false fireplace and sash window. The first thing you see is a hangman’s noose, followed by a desk covered with knives and guns, and a chest of drawers topped with a glass case containing submachine guns. An opening leads from this ante-chamber into the museum proper.

We start at the gun drawer. As well as rifles and replica rifles, it contains walking sticks, umbrellas, flick knives and other random bits of metal. The Curator asks me to guess which of these items are guns, pauses for a heartbeat, before stabbing with his finger: shotgun, shotgun, pistol, shotgun, pistol. They’re all guns, the walking stick and umbrella, even the flick knife. And all have been used on London streets. He takes out a walking stick, demonstrates how quickly and easily it converts into a gun and back again, and shuts the drawer firmly.

The Curator is enjoying himself, less begrudging by the minute. He picks up a sword and hands it to me. As I take it by the scabbard, he pulls off the hilt, which is a short, detachable, vicious blade, and imitates gutting me with it, which, he says, is exactly what happened to the police officer who first encountered this duplicitous double-weapon. It’s called the Cop Killer, he says. And, just like that, any lingering sense of fun wafts out the window.

The point of this drawer, The Curator explains, is to show new coppers the dangers they face from disguised weapons (the walking-stick gun et al were legal until 1959).  The inference is clear: anything is a potential weapon.

The Curator is passionate about the museum’s purpose and happiest when discussing the history of crime. Everything that comes into the museum, he emphasises, is for teaching purposes, and not just for cadets. Senior officers come here for briefings and lectures to discover historical parallels of contemporary cases.

We move into a large room with the fusty atmosphere of a regional museum. Display cases that mark out a mazy circuit of London’s criminal history. One of the first is on serial killer Dennis Nilsen, who boiled the flesh of his victims on his stove before poured their fat down his drains. I look at the Nilsen display. It’s a badly stained cooker topped by a battered aluminium cooking pot. I feel sick. 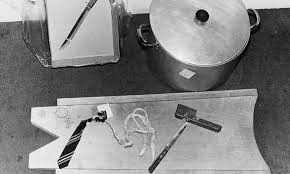 The rest of the tour passes in a blur. There’s a display on officers killed in the line of duty; the protective apron used by John Haigh, the Acid Bath Murderer; vials of poison; forensic photographs; blood-stained weapons; a crossbow used by the Krays; a ketchup bottle from the Great Train Robbery (‘I can’t talk about that,’ says The Curator cryptically); evidence related to Crippen, Christie and cannibalism; explosives used by Fenian terrorists; the IRA rocket launcher that fired at the MI6 building in 2000; and the tiny ricin-loaded pellet pulled out of Georgi Markov’s leg, where it had been inserted with an umbrella.

It’s a tough tour, not because of any individual items (Nilsen’s cooking pot excepted) but through the accumulated weight of otherwise anodyne objects that collectively represent the many horrible things people have done to each other. It’s a chilling, unsettling experience that sits somewhere between the self-chosen prurience of reading a book about Fred West and the necessary horror of the Imperial War Museum’s Holocaust gallery.

The Curator reassures me that visitors, police officers included, regularly faint during tours, but this is clearly a museum that has been designed by the police, for the police. That point is underlined by one of the last displays, a huge pile of weapons taken from demonstrators at an anti-Vietnam War march in 1968, a so-called peace march comments The Curator, as well as riot shields from Brixton, melted by petrol bombs, and Broadwater Farm, peppered by bulletholes. This is what you are up against, the display says. Trust nobody.

The result is a museum that works on two levels: one is the straightforward practical side that allows policemen to see and handle real evidence and learn how it was used to solve cases, while the other, possibly more important, is psychological, showing the police what the people out there will do to them, and each other, given half a chance. In so doing, it validates the Met’s instinctive suspicion – as embodied by The Curator – of outsiders, the public, the people they protect and serve.

I leave the Crime Museum in a sober mood, sure of only one thing: having tried so hard to get inside, I’m in no hurry to return.