This weekend, the grandly titled Viktor Wynd Museum of Curiosities, Fine Art & Natural History opens at 11 Mare Street, Hackney. You may already know of Wynd’s whims. An intriguing dandy, Wynd is the founder of the Last Tuesday Society – a body that promotes the esoteric in lectures, salons and workshops – which included Wynd’s own huge collection of oddities and curiosities, acquired over a lifetime of inquisitive travelling and impulsive purchasing. Originally, these items were meant to be sold – Wynd is still a dealer in the weird, a middleman in this strange underworld of people that buy and sell the corpses of giant spider crabs and Javanese hen’s teeth –  but he found “it didn’t work as a shop and it isn’t fun selling stuff. I had to keep buying and you can never be sure what will sell, it’s an endless cycle. So I thought it would be more fun to make it into a museum.”

These curiosities are now going on display as the new museum. And curious they certainly are. On the shelves are two-headed lambs, tribal skulls, dodo bones, plastic toys, lion skeletons, radioactive scallops, Victorian dolls, surrealist art, an artificial foreskin, a cassette of a John Major speech on the subject of red tape, a Victorian mermaid, convict Charles Bronson’s sketches, feathers from extinct birds, a giant hairball from a cow’s stomach and jars of celebrity poo [“How did you persuade Kylie Minogue to poo in a jar for you?” I asked, when interviewing him for Eurostar; “I asked her very nicely,” he replied.]

Impeccably arranged cabinets contain delight after horror after delight, some labelled, others entirely mysterious, but all put together in a way that implies the art of the display, the way these things look on the shelves, is every bit as important as the items themselves.

London has always appreciated the chance to gawp at a gruesome gallery like this. Wynd’s endeavor harks beck to the very first public museum to open in London at Don Saltero coffee shop in Cheyne Walk in 1695. Saltero, a barber, had previously been known as James Salter and worked for Hans Sloane, the collector who started what became the British Museum. Sloane reputedly gave some of his cast-offs to Saltero, who used them to attract custom to his coffee shop. In 1713, his catalogue boasted in terrible rhyme: “Monsters of all sorts here are seen, Strange things in nature, as they grew so; some  relics of the Sheba Queen, and fragments of the famed Bob Crusoe.”

Saltero’s collection included such marvels as  a giant’s tooth, a necklace made of Job’s tears and Pontius Pilate’s wife’s chambermaid’s sister’s hat, which had been made in Bedford. It was, nonetheless, hugely popular and by 1760 the collection includes priceless artefacts like the Pope’s candle; a piece of the true Cross; the Four Evangelists’ heads cut on a cherry-stone; the King of Morocco’s tobacco-pipe; Mary Queen of Scots’ pincushion; Queen Elizabeth’s prayer-book; a pair of Nun’s stockings; Job’s ears, which grew on a tree and  a frog in a tobacco-stopper. Moreover, it had inspired other entrepreneurs, eager to educate the public in the wider mysteries of the world, to follow likewise. Among those following in Saltero’s wake was Mr Adams of the Royal Swan in Kingsland Road, not far from Wynd’s palace of the strange. In 1756 Mr Adams was exhibiting”the heart of the famous Bess Adams, that was hanged at Tyburn; Sir Walter Raleigh’s tobacco-pipe; Vicar of Bray’s clogs; teeth that grew in a fish’s belly; the very comb that Abraham combed his son Isaac and Jacob’s head with; Wat Tyler’s spurs and the key of the door of the Garden of Eden.”

Wynd is an artist as well as a collector and showman, and his museum will double as a gallery, opening with a show devoted to early British Surrealists and including work by Austin Osman Spare, Leonora Carrington, Grace Pailthorpe and Reuben Mednikoff. His curiosities are also sprinkled with the occasional artistic embellishment, whether its sculptures donated by artist friends, his own drawings, fine work by the likes of Spare or Mervyn Peake, or more occultish fare, like “blood squeezed from a stone” or a box containing “some of the darkness that Moses brought upon the Egyptians”. These latter items are much like the imaginative exotica of Saltero and Adams, and also remind me a little of Yoko Ono, and her attempt to auction in London a ‘Vial of Genuine New York Tears’ and ‘Jar of Captured Cloud Formations over the Bronx’  to subsidise Norman Mailer’s Mayoral candidacy.

Wynd’s collection features a lot of dead things in jars – babies, dissected vaginas, stuffed animals, old bones, beetles, butterflies, intestinal worms – but he rejects the notion that it is simply a celebration of the macabre, a house of horrors designed to shock the straights. “Nobody’s ever been shocked,” he says. “If you are going to a curiosity museum you want to see dead babies, it’s what you expect. That isn’t what’s new, what’s new is the idea that dead babies and Furbies are equally attractive. It’s uncanny rather than macabre, it’s the juxtaposition of items, setting off thought processes.” 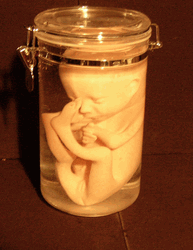 “I see putting everything together as an art,” says Wynd. “If you are a collector then the world is your tins of paint and the walls and cabinets are the canvas. Everything has to look right. It’s a way of trying to understand the world, but a world that has no meaning. It’s all the pretty things that show what an amazing place we live in. It’s also an attack on conventional aesthetic values, so we have a Furby, which is seen as completely valueless, sitting next to a rare and valuable skull of an extinct beast, sitting next to Chinese sex toys. I don’t recognise a distinction between high and low, it’s just if I like it. It also makes me laugh. I’m quite miserable and this place cheers me up.”

It’s not entirely clear how much Wynd enjoys his role as a collector. As he points out, most of us collect when we are children, but then grow out of it. The collector is in a state of permanent pre-adolescence, unable to move on, still fixated by those items that first caught his attention many years before. Wynd says that as a child his favourite places were the Natural History Museum and the Pitts-River Museum. In adulthood, he is still trying to locate that childish sense of awe and intellectual awakening.

He recalls being a student in Elephant And Castle and compulsively filling a garage with items he find on the streets – “I couldn’t pass a bin liner without opening it.” Later he moved to Paris and discovered that at the end of the month everybody’s rental contracts ended at the same time, and on these moving days treasures would be left outside every block of flats. “It was heaven.”

The problem, he says, is that a collection is “like a garden. It’s never going to be finished. It’s never done. It’s a psychological condition, it’s stupid, it’s pointless and causes endless worries.” It also gives us the Museum of Curiosities, for which London should be thankful. Go gawp, embrace the uncanny.