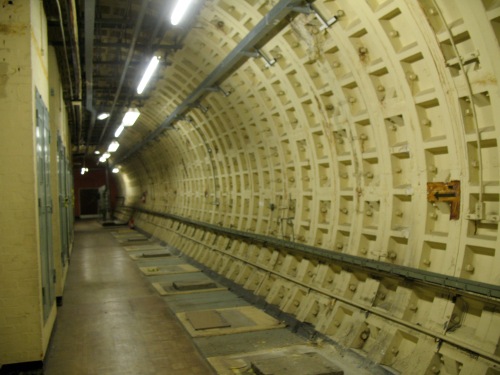 Dave Hill at the Guardian has this interesting post about Ajit Chambers, the man who wants to help Londoners get into disused underground stations.

I have been in contact with Chambers since 2009, when he first sent me a teasing business card in the post to promote his idea of turning old underground stations into tourist attractions. One thing that has always impressed me about Chambers is his determination to succeed despite the tremendous obstacles in his way (basically, TfL are incredibly reluctant to open old stations to anyone, let alone to give an outsider access to such prime assets).

I interviewed Chambers last month for a feature that runs in the June edition of Metropolitan, the new (excellent) magazine for Eurostar passengers. He told me then that his motto is ‘proving things can work by doing them without asking’ and his decision to bushwhack Boris Johnson and Anthony Browne at a conference for small businesses is a perfect illustration of how he goes about his work. No wonder TfL are ruffled.

Chambers got his idea on Valentine’s Day 2009, when he was looking for something to do with his wife that was ‘more exciting that just sitting in a restaurant with loads of other couples. I wanted an adventure, something like a first date, and I thought there must be loads of secret doors all over London just waiting to be opened. So I started researching and discovered the abandoned stations.’

He has identified 26 sites he wants to pursue with a view to opening each one as a venue with three revenue streams – as a museum, as storage and as a space for entertaining. This is astonishingly ambitious and he is so far being stymied by TfL, so he is trying to circumvent them by purchasing the deep-level shelter at Chancery Lane (pictured above) – which I wrote about after visiting in 2008. This would be a terrific venue, as it has a fascinating back story, is wonderfully evocative and lies at the heart of a network of underground spaces.

I hope he succeeds. Londoners have a tremendous thirst for the mysterious parts of the city that lie beneath their feet – the weekend opening of Brunel’s Thames Tunnel earlier this year proved to be extraordinarily popular – and a dedicated museum to Subterranean London would be possibly the most exciting to happen in this city ever (although I may be biased in this view).

Chambers is determined, as Boris and Browne are soon to discover, and I would never bet against him. ‘I’m not going to give up,’ he told me. ‘There’s no stopping me. And as soon as people realise that they seem to come on board pretty quickly.’

Update There is some discussion about the feasibility of Chambers’s plan at Annie Mole‘s blog.