‘I didn’t want to drop a turd on the reader’s lap’: Meeting James Ellroy

James Ellroy has a new book out, so I thought I’d republish my interview with him from 2009 when he was promoting Blood’s A Rover. I was unusually nervous before our meeting as I’d heard Ellroy was a difficult man to talk to and his memoir – My Dark Places – saw him plead a strong case for his own insanity. But all in all, it went pretty well. Ellroy seemed sad rather than difficult, although anybody can seem lonely in a Chelsea Harbour hotel on a Sunday morning. I wish I had kept the full transcription of the interview, as we also discussed, from memory, his research techniques and his plans for a new series of book, the first of which has just been published.

Smart, stern and ramrod straight, James Ellroy sits in his Chelsea Harbour hotel room and broods about women and words. He is upright. Terse. Correct. He doesn’t quite speak the way he writes – hell, nobody speaks they way he writes, in sentences entirely unadorned with commas, adjectives or conjunctions – but his sentences are short, exact, punchy.

‘I love the English-American idiom,’ he says. ‘I love Yiddish. I love racial invective. I love alliteration. I love slang. I love profanity. And the simpler the language, the more direct, the more blunt, the better. When writers try to imitate me they always put in too many words, and none of it works.’

People try to copy Ellroy because his jazzy, rhythmic, slang-strewn pulp-prose is deceptive in its simplicity and addiction in its execution. The latest fix comes from Blood’s A Rover, the Nixonland masterpiece that completes his Underworld USA trilogy, an alternative history of conspiracy, crime and collusion that includes American Tabloid and the psychotic The Cold Six Thousand. Like its kin, Blood’s A Rover is a bloody collision of Johnny Cash, Raymond Chandler and Sam Peckinpah in which Ellroy uses three fictional male characters to explore factual events – in this case, the ascent of Richard Nixon, who joins J Edgar Hoover and Howard Hughes in the pantheon of American personalities Ellroy has slyly redrawn. ‘You’ve got to like Nixon,’ he says. ‘He;s funny, full of shit, drunk half the time. You’ve got to love a guy like that.’

Where this novel differs is in its bold ancillary characters such as Joan Klein, a femme fatale who embodies Ellroy’s tribute to a life-changing lover. ‘It’s about a boy who finds a matriarch, and that’s my story,’ he says. ‘One of the men is asked why he does what he does and he says, “So women will love me” and that’s why I write. I wrote it to honour Joan. There was a dark romanticism to the relationship, it ended badly and I will never see her again. There’s a line from The Hilliker Curse [Ellroy’s second memoir]: “I left bloodspills wherever we went.” She just cut me open.’

Joan is the book’s hinge. She is pursued by all three male characters – Wayne Tedrow Jr, a tortured ex-racist; Dwight Holly, a CIA fixer with shadowy brief and headful of grief; and Don Crutchfield, a teenage voyeur with the knack of being in the wrong place at the right time. All of them represent a part of Ellroy himself and all of them are looking for ‘salvation, redemption’, reflecting what Ellroy calls his ‘misunderstood Christian morality’. Joan brings female strength and left-wing idealism into their (and Ellroy’s) masculine right-wing world.

‘I wanted to write the story of that woman and me, and I wanted to write about symbiosis and synthesis and how the right and left need each other and how that often leads to catastrophe, because everything Joan and Dwight touch turns to shit,’ explains Ellroy.

There are other changes from past books. The prosy style is turned down a notch, the violence less gut-churning, the noir bleached a little. ‘The Cold Six Thousand was too difficult,’ he admits. ‘My ex-wife said: “Babe, it’s the most ambitious novel I have ever read, it’s 100 pages too long, it’s fucking complex, the style is too difficult and I didn’t know what the fuck was going on.” And she was right. So here you have a range of characters who are much more thoughtful, much more, in their weird way, composed and who think about shit a great deal more, so you need a more explicatory style.’

Ellroy breaks up the pace with journal entries written from less testosterone-soaked perspectives, and softens the mood towards a tentatively upbeat conclusion. ‘I don’t feel bleak,’ he says. ‘It’s very much a book about romance. I didn’t want to drop a turd on the reader’s lap.’

As distinct as Ellroy’s style is his setting, a pre-70s America where powers is held by the Feds and CIA, rogue cops, Hollywood players, bent pols and the Mob. Plots are punctuated by historic events, which he uses and interprets as narrative demands. It’s a world Ellroy has made his own, but didn’t invent.

‘The three Underworld USA book were launched by Libra by Don DeLillo [a fictionalised biography of Lee Harvey Oswald] and his take that JFK was assassinated by renegade CIA guys, crazy Cuban exiles and the Mob,’ he admits. ‘Conspiracy is there, I love writing about it, I love exploring the collusive mindset and I can’t prove any of it. What it comes down to is whether it is dramatically viable and whether the human infrastructure of the big public events is believable. That’s my job. I take the ideas, the characters, the milieu, the real-life history, the real-life situations and the research fills it in. Then I lie in the dark, I think of love stories, and I brood.’ 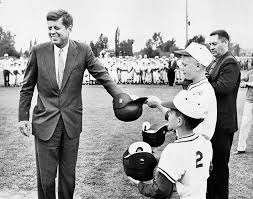