I went to see the new Tate Modern extension yesterday and very impressive it was too. The extension by Herzog & De Meuron manages that rare trick of looking new and exciting while also reflecting the character and style its neighbouring building. It reminded me a little of the way the British Library sits so comfortably yet confidently next to St Pancras. 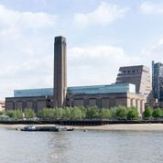 The interior is also neatly done, despite some very peculiar shapes in corners. There appears to be more public space than in the original galleries – although that may be because it was filled with only 100 or so journalist rather than several thousand tourists – and it feels genuinely sociable, as well as realistically industrial. The viewing platform on the 10th floor is great, although the vista to the south is sadly blocked by the hideous tower to the left of the image directly above. 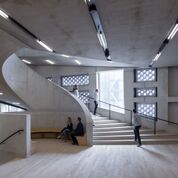 The art was fun too, featuring some great oversized installations on the second floor, plus a mix of disciplines – including incredible street photography taken in Newcastle – and loads of women and international artists.

Naturally, this sensitive, thoughtful and exciting treatment of what was once Bankside Power Station got me thinking about its older sibling along the river in Battersea. Both buildings were the work of the same architect, Giles Gilbert Scott, and so naturally share a similar style, most notably the use of decoration on the brick envelope to dress the mass, making it more palatable. Some critics believe that Bankside is the better building, describing it as Scott’s masterpiece.

It is certainly a fine building but I’m not even sure I was aware it existed until it was converted into Tate Modern in 2000. I would have walked past it, sailed past it, looked straight at it numerous times – but the fact of its existence escaped me. This is not uncommon I’ve found and Bankside, for many, only became noticeable when it was turned into an art gallery, finding in its second life a prominence that had eluded it for decades – and perhaps this invisibility is something Scott should be commended for, as the power station’s presence on the river opposite St Paul’s was immediately and understandably controversial.

This is all in stark contrast to Battersea, a building that once seen is impossible to forget and which has always had a prominence you rarely find in industrial buildings, let alone their ruins. Only now, as Battersea disappears behind a curtain of contemporary glass and steel is that threatened – so while Bankside eventually found visibility in its afterlife, Battersea faces obscurity, with the thoughtfulness of the Tate’s new extension highlighting the brash ugliness of the new developments around Battersea.

As ever, one ponders alternative presents to that in which we find ourselves. When it became known in the early 1990s that the Tate was looking for a second building, having acquired a collection too large to be contained within the original Pimlico gallery, campaigners at the Battersea Power Station Community Group wrote to the trustees, suggesting they make a bid for Battersea Power Station, then still in the hands of theme park magnate John Broome but already in a terrible state. This, they argued, would make the perfect location for a new art gallery: it was huge, impressive, historic and directly across the river from the Pimlico site. Romantic as this might have been, Tate’s trustees – possibly alerted to the idea of using a power station by the campaigners – instead plumped for Bankside, which had closed in 1981 and facing demolition, for entirely practical reasons.

Inside Bankside before the art arrived

For one, Bankside is much smaller than Battersea, only a third the size. Secondly, Bankside is much easier to get to, surrounded by tube and rail stations, and even a new bridge to the City, while Battersea is strangely isolated despite its prominent location. Thirdly, Bankside wasn’t listed, making it much easier to convert -and later, to stick gargantuan limpet-like extension alongside, when it turned out the original building was too small.

Bankside was saved and the arrival of Tate helped precipitate a huge cultural change along that part of the river. Further west, however, Battersea’s struggles had barely begun.

Up In Smoke: The Failed Dreams Of Battersea Power Station published by Paradise Road.