Frank Harris was an objectionable little man. He was sallow as a gypsy. He had bat ears, dark hair with a crinkle in it that grew low on the forehead, and a truculent mustache. People remarked on the richness of his bass voice. His charm was great, particularly for the opposite sex. He had the gift of gab to a sublime degree and a streak of deep scoundrelism that was the ruin of him.

Frank Harris wrote My Life And Loves in 1922 when he was 68. It was partly about his career as an editor of the Evening News and Saturday Review in London, where he had championed critics like Oscar Wilde and George Bernard Shaw, but it was mainly about sex.

Harris was a rumbustious character with a voice so deep that one of his many mistresses claimed ‘it made her sex open and shut’ when she heard it. His memoir was scandalously candid, and featured several photographs of naked women, to emphasise the point. 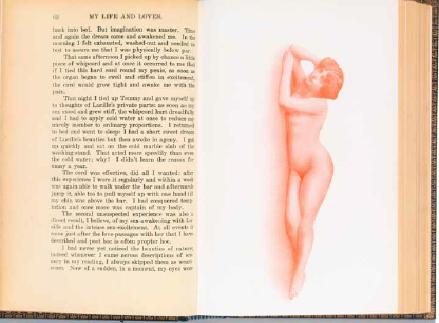 It had been a turbulent career. Harris was born in Ireland, educated in Wales and after a series of adventures in America, settled in London in 1882, where he talked his way into newspapers. His greatest triumphs were at the Saturday Review, the London paper he edited in the 1890s, publishing criticism by HG Wells, Shaw and Wilde and gaining a reputation for being unreliably unspoken and outrageously opinionated for a man of his position. He later wrote a biography of Wilde, who surely would have agreed with Harris’s insistence that ‘Modesty is a figleaf for mediocrity’.

As George Bernard Shaw said, ‘He blazed through London like a comet, leaving a trail of deeply annoyed persons behind him.’ Harris was briefly adopted as a Conservative candidate for South Hackney, resigning after he defended Charles Parnell during an adultery scandal. He also defended Wilde during his trial, and suggested he flee the country while out on bail, and took the side of the Boers during the Boer War.

Years later, Harris looked back on his time as editor with satisfaction. He believed in positive criticism, not handing out brickbats and instructed his critics to celebrate, rather than denigrate. “When I was editor of the Saturday Review,’ he said ‘with the greatest assembly of literary men in history, I had a policy and I believed in sticking to it. There was Shaw and Wells and Rowe and oh, everybody else. I called a dinner and I said: “Gentlemen, it has come to my attention that people have started to call it the Saturday Reviler. Well, this sort of thing doesn’t get us any place. Hereafter the Saturday Review is going to try to find stars, and if it can’t find stars, it won’t merely hurl bricks. What good does it do? Insults, raps, knocks! Mainly lies. Nobody’ll remember them in fifty years. If we can’t do something constructive,” I said, “we won’t do anything.” Well, it worked.’

By 1913, Harris was editing a magazine called Modern Society and was charged with prejudicing a trial after publishing an ongoing divorce case.  ‘It seems to me you have a certain disdain for this court,’ noted the judge during his trial. ‘Oh, if I could only express all the disdain I have,’ replied Harris.

That did it. Harris refused to apologise publicly and was sent to Brixton Prison for contempt. The cartoonist Max Beerbohm visited Harris in Brixton and drew a cartoon, ‘To the best talker in London – from one of his best listeners’. Prints were made and posted all over London in a bid to raise public awareness with the message: ‘This is the man that was sent to prison.’

Harris was released after three months, complaining afterwards that ‘what I suffered most from in prison was lack of books’. Shortly after his release he left London and never lived there again. He died in Nice in 1931. 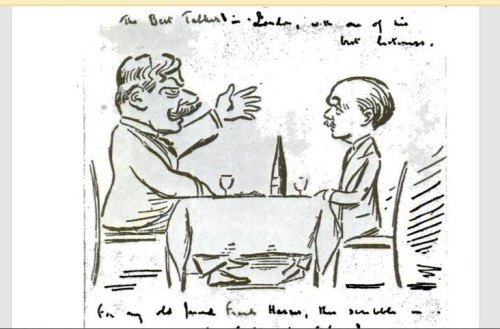 For more on Harris, visit this excellent Odd Books website.