There is almost endless fascination with London’s lost rivers, as can be seen with the publication of Paul Talling‘s fine – if brief – new book on the subject. I have written about them a number of times and this article first appeared in Time Out in 2008.

Londoners love what they cannot see. Take the excitement that is generated by ‘ghost tube stations’ such as Museum and Aldwych that sit unused beneath our feet and can occasionally be glimpsed from trains. Yet people rarely blink when they descend escalators into the remarkable interiors of busy, living stations. Concealment and abandonment excited the mind more than the here and now.

So it is with London’s lost rivers. Anybody can check out the quirky Lea or watch the Wandle weave serenely past Merton Savacentre, but mention Brixton’s Effra or the City’s Walbrook rivers and the eyes of a certain sort of Londoner will light up, and a torrent of trivia about lost rivers will gush forth. This is an interest that can take us to unusual places. When Design for London recently mounted London Open City, an exhibition about creating new spaces in the capital, the idea of restoring buried rivers got people talking. The Sunday Times claimed Boris Johnson was going to greenlight the scheme and Peter Bishop, then director of Design for London, said: ‘When these rivers are opened up, Londoners will be absolutely amazed.’

Which was great news for James Bowdidge, a property developer with a yen for the Tyburn. ‘As soon as I learnt about it, I became fascinated with the old river and the way you could see it in street patterns,’ says Bowdidge, who channelled his enthusiasm into a curious project – ‘an angling society for a river that didn’t exist’. The Tyburn Angling Society, an irregular supper club, was born – Ken Livingstone attended their 600th anniversary dinner, 600 being a number they plucked out of thin air.

So far, so whimsical.

However, Bowdidge – a London buff with half an eye on property prices – has also looked into raising the Tyburn, which was covered in 1750 but still meanders underground from Hampstead to Westminster. ‘I asked an architect to draw up plans of the building that would have to go. We write to Westminster City Council about it every now and then. But they are sceptical because this particular plan requires the demolition of their headquarters.’

Now Bowdidge’s hope is renewed. ‘If you look at the planning statement the Mayor brought out, you can see a degree of support for this sort of project. And now the subject is live it’s worth thinking about seriously – what could you do? There’s no reason why you couldn’t reinstate the river through Regent’s Park. You don’t have to demolish billions of pounds of property, there are places where you could really bring it back if you looked at it pragmatically.’

Well, perhaps. The notion that Boris has gleefully embraced the scheme is not supported by the raised-eyebrows reaction of a GLA spokesperson, who told me: ‘Opening up parts of London’s subterranean river networks is one of many ideas proposed at the exhibition… As with all the ideas designed to stimulate thinking, a full study would need to be undertaken before any could be taken forward.’

In other words: Never. Gonna. Happen.

At least, not with the Mayor’s money. But there are always other pockets to pick. In 2003, the Environment Agency rescued the Quaggy, a tributary of the Ravensbourne, from an underground culvert in Kidbooke’s Sutcliffe Park, and there are plans to restore the Ravensbourne itself in Lewisham town centre, paid for by a regeneration group called Urban Renaissance in Lewisham (which includes the Quaggy Waterways Action Group). Architect Will Alsop has floated a similar scheme for Croydon, where a branch of the Wandle is interred. He says, ‘The buried river thing Boris is banging on about is a really good idea. In Croydon, the Wandle was only buried in 1967 so you can easily bring it back in patches: ponds or lakes or some elements of river. And you don’t even have to bring them back; you can leave some underground and go and see them there.’ 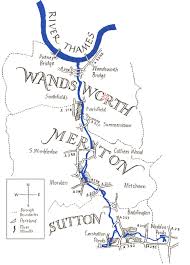 Which brings us neatly to the most interesting scheme, that of Nick Robertson, a designer and London obsessive who once walked the Thames from source to sea with Peter Ackroyd (‘every Saturday for a year’) and harbours a fascination for the Fleet. Bowdidge refers to the infamously filthy Fleet as ‘the ditch’, and Robertson does not disagree. ‘There’s nothing artistic about the Fleet,’ he says. ‘It was bricked up for good reason. He’s right to call it a ditch. But some ditches are worth celebrating.’

Robertson’s plan was ‘the confluence of several ideas’. One was a walk he completed along the course of the Fleet – ‘it was a river route, you could see it in street names, and in the topography and geology; a river that wasn’t there, but was.’ A second influence was an exhibition at the Royal Academy in 1996 called ‘Living Bridges’, which author Stephen Bayley has said marked the ‘moment when bridges have become showpieces of architects rather than engineers’. And the third was a visit to the Monument, the column raised by Wren and Hooke in 1677 to commemorate the Great Fire.

Robertson explains: ‘What interested me about the Monument was that it wasn’t representational. You climbed this big Doric column and saw what you saw, which was the extent of the destroyed city. The Monument is not the monument – what you see, the rebuilt city, is the monument. Stylistically, it’s of its time but conceptually, it’s way ahead.’

Robertson and an architect friend Iain Johnston explored options. ‘We discussed whether it was a good idea to open up the river and very quickly dismissed it because most plans to open up the hidden river are missing the point. The point is this river is covered. That’s what is interesting. To open it up is to ignore the historical process. And it’s ignoring the mystery, the charm. If you opened up the Fleet, it would regress to what it was, an urban river: charmless, shit-filled.’

Instead, Robertson ‘thought it would be interesting to have a bridge that went underground and the obvious site was Ludgate Circus because that was the site of the Fleet Bridge and Wren’s bridge when he tried to turn the Fleet into a canal.’ They designed a subterranean chamber that went under the road and had a glass floor through which visitors could observe the still-living Fleet. ‘A warped bridge over a warped bridge’.

He sent his proposal to the head of Thames Water where, as far as he knows, it still resides. The Fleet and the Tyburn were incorporated into Joseph Bazalgette’s sewer system in the 1860s and both Bowdidge and Robertson have blagged trips underground with Thames Water sewer workers. Says Robertson: ‘One of the things I found most interesting was the amount of decoration. The designers stopped and thought what they were doing even though nobody was going to see it – it’s effectively dressing up shit.’

It’s true. London river-sewers are artfully constructed, beautiful things that deserve celebration, both for what they are now and what they used to be. The Guardian’s Ian Jack disagrees. When confronted with Bowdidge’s cheerful scheme of tree-lined tributaries, he wrote that the Tyburn was a ‘sewer owned by Thames Water and more remotely by pension funds in Canada and Australia. It has been a sewer for hundreds of years as part of a combined system, far too expensive to separate, that carries rainwater and human waste.’

And that’s that. Robertson at least sees a way past this brutal approach, and while his Fleet Bridge is the sort of imaginative scheme destined to go nowhere, he also believes the Fleet should be remembered in simpler ways, such as surface markers along its course of which there are none. It seems London is ashamed of its lost rivers, or at least of its treatment of them.

‘The Fleet is something London has buried,’ says Robertson. ‘So it appeals to people who feel strongly about the occluded side of London history.’ The best way to deal with it, he thinks, is to go down and confront this ‘trapped nerve’.

‘It was once a bubbling brook of bucolic bliss, then it turned into an open sewer, then it was bricked up,’ he says. ‘Now it needs to recreate itself in a different way. To open it up is to miss the point, pandering to a nostalgic view of London. London should never be nostalgic.’

Spoken like a true Ballardian (and Ian Jack would surely approve), but everybody, even a ruthless modernist, is allowed to look back every now and then and wonder. So Robertson tells me to head up Farringdon Road and down Ray Street towards Back Hill. There, in the road outside The Coach & Horses, is a grill, and ‘when you stand over it,’ says Robertson, ‘you can hear the Fleet belting beneath your feet.’

So it does, the magnificent sound of a torrent of water battering its way downhill directly beneath London streets. Sewer or river, call it what you will, but the Fleet lives on. Deep waters run still.