Forget the Rosetta Stone or Boris’s new pretend Routemaster at the London Transport Museum, there’s some crackingly quirky stuff to be found in London museums if you are prepared to look hard enough.

So here are five favourites from the top of my head.

Forget the ridiculous Ashes urn, the highlight of the MCC museum has to be a dead sparrow. It was killed by a cricket ball hit by Jehangir Khan in a match at Lord’s in 1936 between the MCC and Cambridge University. In death, the bird was treated with utmost dignity, being stuffed and stapled to the ball that killed it.

The Wellcome is filled with some of the oddest semi-scientific bric-a-brac imaginable, but I’m particularly fond of this Chinese torture chair, as it is just so mind-bogglingly vicious. In fact, it’s so vicious it would kill anybody as soon as they sat on it, so was probably only used for psychological torture. So that’s okay then.

Possibly the coolest thing ever. 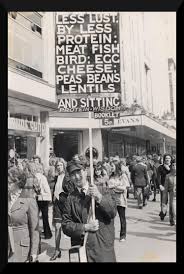 Stanley Green, the Protein Man, used to march up and down Oxford Street carrying this placard and was a legendary sight in London for decades until his death in 1993. The placard is now in the Museum of London. A lovely piece by curator Cathy Ross tells the whole story here.

Bizarre sixteenth-century boat-clock designed to move along a banquet table, tell the time, strike the quarter-hour and fire its cannons. Wonderfully ridiculous.

And that’s just for starters.

This entry was posted in Uncategorized. Bookmark the permalink.