War (museums), what are they good for?

After last week’s trip to the Imperial War Museum North, this week I was at its southern sibling, the original IWM in Lambeth.

I always look forward to a trip to the IWM, not because I have a particular fondness for military memorabilia – although I did have a youthful obsession with the novels of Sven Hassel and still go weak at the knees at any mention of Colditz (it’s not my favourite prisoner of war camp, but I won’t go any further because I’ve probably already put you off with the words ‘favourite prisoner of war camp’) – but because the IWM has a well-deserved reputation, round my house at least, for putting on the best exhibitions in London. Only the Wellcome Collection can compare.

Their latest, opening in time for half-term, is the Ministry of Food about WWII rationing. Not the most promising subject, at least not until placed in the IWM’s capable hands. This, remember, is the museum that managed to make a subject as dull as camouflage not just interesting but fascinating and essential. 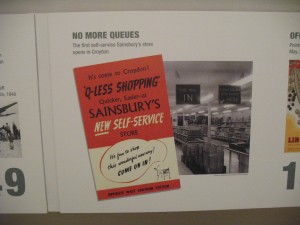 Starting with the land girls and ending with the arrival of Sainsbury’s in Croydon (pictured above), the exhibition looks at just about every aspect of food production during the war. There is a great selection of photos, paintings, posters and props, and also some terrific larger set-pieces such as a full-size greenhouse and a beautifully stocked walk-in wartime shop, a snapshot of which can be seen at the very top. The canteen is also running ration-themed food including mock goose, made with butter and marmite, although there is real food if that sounds a bit much.

It was educational, interesting, accessible, intelligent and fun – all those things an exhibition should be, but so often aren’t. And by that, I include most of those yawnsome chin-stroking ‘blockbuster’ exhibitions at the major museums that always get rave reviews even though everybody you talk to admits they found them a little dull.

No chance of that here. Look, it’s a greenhouse! 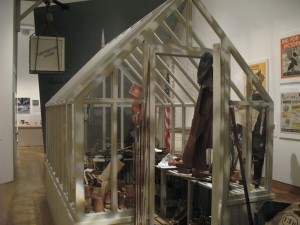 London’s museums face a tough time over the next couple of years, with severe budget cuts expected. At more than one museum, staff members have told me that they are expecting to take a hit whoever wins the general election ‘because they aren’t schools or hospitals’. Perhaps that’s as it should be and museums shouldn’t expect to be subsidised, but temporary exhibitions could easily suffer. They are expensive to mount and the bean-counters can be frustratingly short-sighted when it comes to the concept of long-term added value.

So go see Ministry of Food because a) it’s the right thing to do; b) it’s really very good indeed; c) you’ll discover a lovable character called ‘Potato Pete’. I wonder if he likes crisps?

This entry was posted in Exhibitions, London, Museums and tagged Imperial War Museum, Ministry of Food. Bookmark the permalink.