There is nothing special about this house, other than that I live in it. It is one of hundreds of thousands of almost identical houses built in the second half of the nineteenth century for a London population that was expanding at a ferocious rate.

This was the Great Wen that William Cobbett warned about. In ‘London: The Biography’, Ackroyd quotes ‘an observer perched on top of Primrose Hill in 1862, who looked at the growing city and noted that, “the metropolis has thrown out its arms and embraced us, not yet with a stifling clutch, but with ominous closeness.”‘

In ‘London: The Unique City’, Steen Eiler Rasmussen’s classic book about London architecture, he writes about houses just like this: ‘From railroads intersecting the suburbs of London we see interminable rows of these swarthy little houses with all their protruding little kitchen-wings. It is the most compact type imaginable for a street house.’ He includes a picture and plan of these houses. Look, it’s almost indentical to mine. 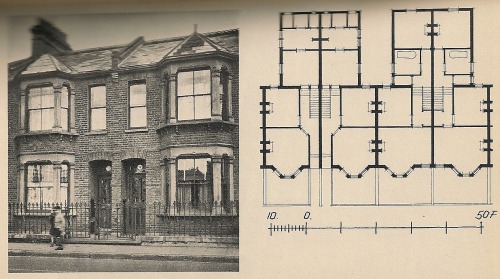 There is a reason for this ‘interminable’ consistency in London housing, and like most things in this country, it is to do with class. Rasmussen explains that in London, because the class system ensured people of the same social strata would invariably live alongside each other, segregated from those richer or poorer than themselves , it was ‘possible to standardise domestic houses: as people living in the same street have the same requirements all the houses can be absolutely uniform.’

This isn’t quite true of my street – at one end there are grand five storey double-fronted detached houses, which would have been for the very rich with domestic servents, and at the other end there are two-storey railway terraces, with every possible permutation in between. This would have meant unavoidable mixing of the classes and was the result of the street having been built over a number of years, starting with the posh end near the park and ending with the common end near the station. But it is certainly true that London houses of the era are near identical.

Rasmussen also knew the exact width of of my new house – 16 foot 6 inches. He writes, ‘the common little house of which there have been built thousands and thousands is only sixteen feet six inches broad. It has probably been the ordinary size of a site since the Middle Ages… but it is difficult to get information as to how typical houses were built in former days.’ After reading this, I measured the front of my house and he was right. Now everywhere I look, from Brixton to Holloway, I see 16 foot 6 inch house fronts. Try it yourself.

So why is this? For an answer, I turned to English Heritage’s photographic collection ‘Lost London’, in which Philip Davies explains exactly why London’s houses of a certain era are all exactly the same size. He writes of ‘a secret ingredient which conferred an innate harmony on the city, and which influenced everything from the layout of an entire neighbourhood to the size of a window pane – the Imperial system of measures.’

Davies continues. ‘Neighbourhoods were laid out by surveyors who used acres, furlongs, rods and chains – measurements which had been in common usage for marking out arable land since the ninth century. An acre was the length of a furlong (660ft) and its width was one chain (66ft). For shorter lengths a perch, a pole or a rod were used. There were four rods to one chain and a London workman’s house had a frontage of one rod – 16 ft 6 in – so entire districts were created based on endogenous proportional relationships.’

As this website explains, when a landowner wished to build a series of houses for his agricultural labourers on an acre of land, the surveyor could go out with his rod and immediately estimate how many houses there was room for.

So the size of the house in which I live in the twenty-first century was decided by a scale of measurement that dates back to the Dark Ages. For those who find London’s overall sense of scale overwhelming, this internal and very visible consistency might at least provide some comfort.