While I dedicate a chapter of my book about Battersea Power Station, Up In Smoke (now available to purchase from the publisher), to the chaotic photoshoot for Pink Floyd’s Animals album cover, this was not the only time the building has been used in popular culture. Here I’ve listed some of my favourites, but there are dozens more involving Dr Who, Slade, The Jam, Richard III, The Who and The Quatermass Xperiment. It was also used as otherwise anonymous filming locations for numerous TV shows, pop videos and films, including Superman III, Monty Python’s The Meaning of Life, Texas, Manson and The Dark Knight but I’ve chosen the moments that made the building the star.

Hitchcock, a Londoner with a sharp eye for locations, was one of the first directors to note the visual potential of the power station, using it in early scenes of his 1936 film Sabotage. Here the power station has only two chimneys, the second half was not started until 1937 and the final chimney not added until 1955.

This superior Cold War neo-noir b-movie includes a thrilling climactic scene at Battersea Power Station, where there’s a great shoot-out amid the clanging pipes and hissing steam. Worth seeking out.

Nell Dunn’s non-fiction collection of writing about Battersea woman is set in the shadow of Battersea Power Station. The poetic back cover blurb for one early edition stated, “Innocence in Battersea lasts as long as the flower remains unsooted by the power station.”

In The Beatles’ film, the power station is shown blowing a fuse at a critical juncture, causing a black-out and allowing the Fabs to escape their bolthole in Buckingham Palace (“A Well-Known Palace”).

This goes a step further, with the restaurant at the top of the Post Office Tower revolving so fast it causes the power station to explode. London’s brash newest icon annihilating a venerable predecessor – a metaphor for the 1960s if ever there was.

Despite the Animals debacle, album sleeve artists Hipgnosis returned twice more to the power station in 1977, photographing futuristic interior covers for Hawkwind’s Quark, Strangeness And Charm and UFO’s Lights Out. 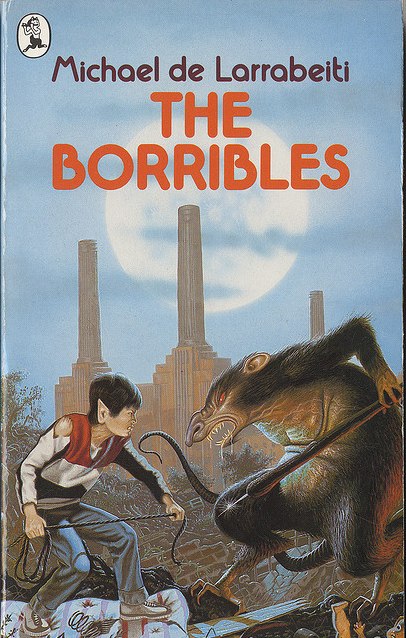 A wonderfully feral cover for this brilliant 1983 children’s novel about a group of cockney elven urchins – Borribles – who are at war with the Rumbles, a group of rat-like creatures that are thinly disguised Wombles. The action begins in Battersea, hence the power station backdrop. I loved this book as a child, and the cover was part of that initial attraction.

This level of the classic ZX Spectrum computer game was one of the first products to reference both the power station and Algie the flying pig. I played this game endlessly as a child – though I’m not sure I really got the pop culture or architectural references.

I was obsessed with Morrissey in 1992, and while I didn’t like this song much at the time, I did love the fact the power station featured a couple of times. Now, I think it is one of Morrissey’s finest pop moments, and the shots of the power station still delight me. A couple of years after this, I saw Morrissey play a gig at the power station, although in the dark and funnelled through tunnels, it was impossible to tell that’s where we were. Morrissey was rubbish too. 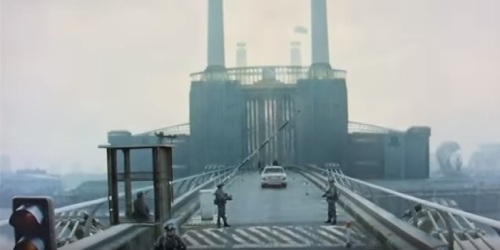 A striking scene in Children Of Men takes place at the power station, which has been converted into the Ark Of The Arts, containing the world’s most priceless artefacts in this dystopian future London – Alfonso Cuaron, like several other film directors, saw Battersea as the sort of building only a totalitarian could love. Note the pig, flying between the chimneys. The film’s location manager told me, “We wanted strong images that had to represent London but not cheesy London. Using somewhere like Battersea meant there was no question of where you were, it was London but proper London, authentic London.” 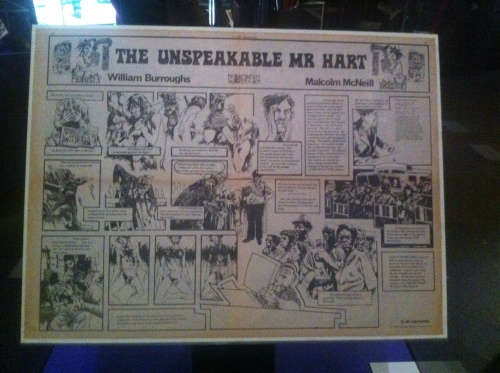 To the library! For comix!

When I was a kid I used to pretend to be ill so I could bunk off school and go to the library. That’s how square I was. I’d feign illness, then nip down to Cheam Library to choose books, before coming home to eat cheese on toast, lounge on the beanbag and read. Boy, was I a devil.

That’s pretty much my ideal day still, and so it’s no coincidence that since turning freelance – which is basically licenced truancy – I have rediscovered my love for the library. Let’s just take a minute to appreciate what a wonderful concept this is: a huge building where you can borrow thousands of books for free, or just hang around avoiding the tramps and reading periodicals.

It’s particularly useful because I have also rediscovered my love for comics. As a teenager, I subscribed at various times to Transformers, Roy of the Rovers and 2000AD but put these childish things away when I was 16 and thought I should be reading NME and Camus, even though I really preferred Rogue Trooper to The Plague and The Lemonheads.

I’ve often wanted to get back into comics and picked up the odd book from the rejects pile at Time Out, but balked at paying £15 for something that I could get through in a couple of hours – if I want shitty value for my entertainment I’d go to the cinema.

Which is where the library comes in handy. I can nip down there once a week and pick up five new books without paying a penny. Brixton Library has a pretty decent selection of comics, and I have a lot of catching up to do, so it’ll keep me happy for a few months yet. Although I wish they’d get in a complete set of The Invisibles.

Most of these are great. Gemma Bovery and Tamara Drewe are wonderfully subtle English middlebrow lit classics – and far preferable as such to, say, Ian McEwan.  Greyshirt is a wildly smart genre spoof that reminded me of the best of the Coen brothers. JLA: The New Frontier was wonderful nostalgia. And anything involving Batman is always going to be great. Well, apart from all of the films.

Then there’s Preacher, which is one of the lewdest, sickest, smartest, weirdest, funniest, scariest and most brilliantly written, drawn and dramatised pieces of art I have seen in any form for years.

When one of my friends found out I was reading comics again, she accused me of reading ‘tosh’. I suppose it is, but only to the extent that most fiction – be it radio, cinema, TV and novels – is ‘tosh’. And some of it is very far from tosh indeed. Equally, I’ve been surprised how many people I know have also turned out to be fans of comics, quietly chipping in with recommendations and suggestions when I’ve mentioned my regained love. And it is love. How could it not be with something as beautiful as this? 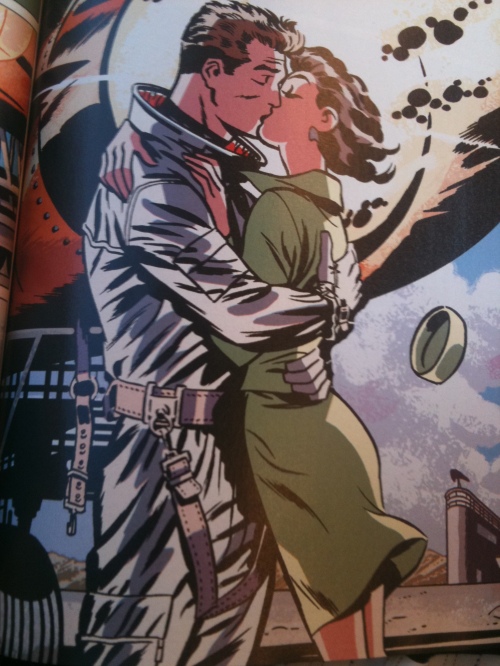