I walk past this corner at least twice every day but only recently noticed the ghost sign painted above the newer enamel one. I assume it was previously covered up, otherwise I’m sure I’d have spotted it at some point in the past five years. Perhaps the jutting pipe points to recent usage.

Much as I like a painted street sign, this one is particularly interesting as it dates back to a time when the street – a short stub of road – had a different name entirely. According to Steve Chambers, who knows about such things, this was one of three name changes in the area – including the eradication of the similar Hamilton Terrace on Shakespeare Road – brought about to tidy up postal addresses.

@peter_watts One of three in the postal district that was renamed. http://t.co/vEpv6zNKHw

@peter_watts The LCC and the Post Office got together to remove all duplicates in the postal district to stop letters going to wrong place.

The ghost sign for the ghost street sits opposite a ghost pub. Hamilton Supermarket occupies the site of the Hamilton Arms, a cosy corner pub opened in 1878 that was captured magnificently in these old photos. It closed in 2004. 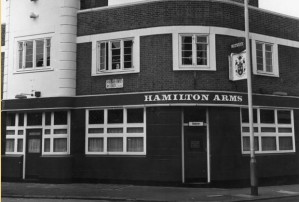