Jimmy Page, Aleister Crowley and the curse of Eddie And The Hot Rods

For the full story of the curse of “Do Anything You Wanna Do”, see my interview with the band in this month’s issue of Uncut magazine.

It’s easy to turn your nose up at any mention of Aleister Crowley, especially if you have little interest in the occult and esoteric world in which he thrived. But to do so means ignoring the man’s often brilliant writing – his Diary of A Drug Fiend is a superior pulp classic, for instance – and also missing out on some of the greatest anecdotes of the 20th century.

For the uninitiated, Crowley (1875–1947) was a British writer who used sex, drugs and magic –often simultaneously – to try to attain altered states of mind and who achieved such a level of notoriety for his activities that he was brandished the ‘wickedest man in the world’. If not wicked, he was certainly a character. As well as signing his letters ‘666’ and conducting numerous affairs with lovers of both sexes, he climbed mountains, wrote pornographic poetry, fraternised with novelists, artists and spies and attempted to write a new American national anthem.

To give a flavour of Crowley’s often bizarre intersections with normal society, in the early days of the Second World War he was tapped up by British intelligence officer Ian Fleming, who asked him to take part in an ‘occult disinformation plot’ against Adolf Hitler’s deputy Rudolf Hess, a fervent believer in astrology and the occult. Crowley was keen, but the plot was ultimately shelved; Fleming, however, later used Crowley as the model for villain Le Chiffre in his first James Bond novel, Casino Royale, in 1953. Another fan of Crowley was Scientology founder L Ron Hubbard. It is claimed Hubbard took part in ‘sexual magick’ (magick was a term favoured by Crowley) with a couple called Jack and Betty Parsons in an attempting to create a magical child, thus fulfilling a prophecy from Crowley’s The Book Of The Law. Crowley was not impressed, writing in one of his typically entertaining letters: ‘Apparently Parsons or Hubbard or somebody is producing a Moonchild. I get fairly frantic when I contemplate the idiocy of these louts.’

Crowley was bisexual and a heavy drug user, eventually becoming addicted to heroin. He also enjoyed peyote, handing it out at parties. On one occasion in New York he gave some to the novelist Theodore Dreiser, who became uncomfortable and asked if there was a doctor in the area. ‘I don’t know about a doctor,’ said Crowley, ‘But there’s a first-class undertaker on the corner of 33rd and 6th.’

This freeness with sex and drugs saw Crowley embraced by the rock and roll generation, particularly after he appeared on the cover of Sgt Pepper. But the story behind another of Crowley’s cover appearances is not so well known. In 1977, Essex rockers Eddie And The Hot Rod wrote a song that was partly inspired by Crowley’s famous motto: ‘Do what thou wilt is the whole of the law’. The band rewrote this as “Do Anything You Wanna Do”, a spirited ode to self-empowerment, and attached the lyrics to a perky pop tune that quickly reached the Top Ten. It was engineered by a young Steve Lillwhite, who recorded it at Island’s studio in Notting Hill.

In recognition of his contribution to the song’s genesis, the band decided to put Crowley on the cover of the single. But they also felt his glowering visage was not really in the spirit of the band, so manager Ed Hollis (brother of Talk Talk’s Mark) attached a slightly comical pair of Mickey Mouse ears to Crowley’s head. 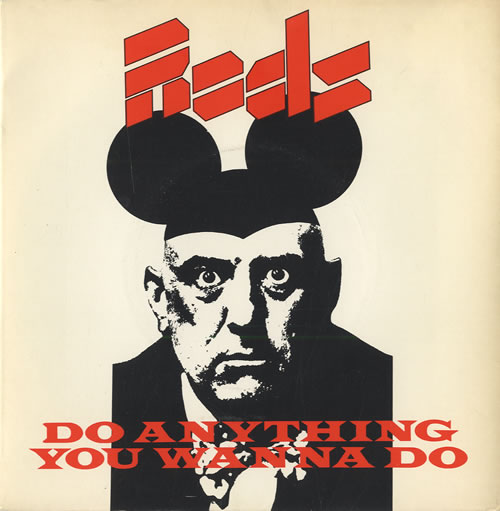 Great cover, big mistake. According to rumour, this image soon came to the attention of Jimmy Page, a Crowley apostle who lived in the Crowley’s old house, had a vast collection of Crowley paraphernalia and was fascinated by the occult. Page had orchestrated the Crowley-influenced occult symbolism that adored Led Zeppelin’s fourth album, which incidentally was also record at Island Studios.

The band were told that Page placed a curse upon Eddie And The Hot Rods for their disrespectful treatment of the Great Beast. From that moment, the band were plagued by problems. They were dropped by their label, their manager became hooked on heroin and they never bothered the higher reaches of the chart again. From behind his Mickey Mouse ears and with the help of satanic rock royalty, Crowley had got his revenge. As bassist Paul Gray told me, ‘Weird shit happened after that. A lot of people said we shouldn’t have fucked about with Crowley.’

15 responses to “Jimmy Page, Aleister Crowley and the curse of Eddie And The Hot Rods”