Peter Hitchens on drugs and the moral, opium-eating, Victorians

Peter Hitchens is a very clever man. I’m sure he’s also sincere – I can’t believe British newspapers would employ somebody to say stupid and provocative things just to get attention, after all – but judging by the interviews he’s conducted for his new book about drugs, The War We Never Fought, he’s a little bit daft.

Hitchens theory is that there has never been a war on drugs. ‘Drug-taking was, in effect, decriminalised by the Misuse of Drugs Act 1971,’ is how Decca Aitkenhead paraphrases. Instead, he harks back to the golden age of the Victorians, when there was ‘increasing self-imposed moral conduct’ (Hitchens’ words.)

Where to begin with this nonsense? Well, let’s just stick to the last bit, those morally virtuous Victorians. In a sense, he’s right: the Victorians didn’t take illegal drugs. That’s because they were too busy snaffling down the legal ones – things like opium, cocaine and cannabis – which were available to just about anybody who needed them until 1868, and then over the counter from chemists until 1926. This was the golden age of drug-taking in Britain, with opium being consumed on a scale we could scarcely now believe. 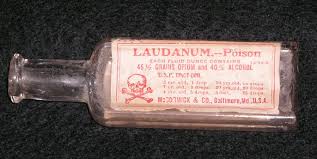 Victorian London was awash with opium, not in semi-mythologised Chinese opium-smoking dens in Limehouse (of which there were very few), but in pubs, chemists, general stores and markets, where it was sold in bottles, powders, pills, lozenges, on plasters, in sweets and much else besides. The centre of trade was in Mincing Lane, London, where 90 per cent of transactions occurred. It was most commonly taken as laudanum, a tincture of opium and red wine, with saffron and cinnamon.

This was not thrill seeking. In the days before aspirin, opium was one of the few reliable painkillers available to Victorians, especially especially fever and diarrhoea, but also malaria, smallpox, syphilis and TB. And it was effective as well. As anybody who has taken codeine or morphine will confirm, opiates have a tendency to block you right up – something that was particularly helpful when the next cholera or dysentery epidemic was just around the corner.

However, opium was also used on children, particularly when teething, in specially formulated sweet concoctions like Godfrey’s Cordial and Mrs Winslow’s Soothing Syrup, and thus surely led to the deaths of many by overdose. It also, believes the drug’s historian Martin Booth in Opium: A History, ‘provided an escape from the misery and vicissitudes of working-class life.’ This was especially the case in the Fens, where ‘many never take their beer without dropping a piece of opium into it.’

Because of these two factors, opium was belatedly seen as a physical and spiritual danger, and Victorian abstinence advocates put it right up there with alcohol and tobacco as serious threats to British life. What’s interesting, though, is the way – anecdotally at least – users were able to effectively and relatively painlessly self-medicate, living normal decent lives despite their addiction, without resorting to crime. This is true for the working classes, it’s true of the famous opium-eating writers like Coleridge, Shelly, Keats, Collins and De Quincey, and it’s also true of the many great statesmen – the sort of people who shaped the British Empire so beloved by Peter Hitchens – who took the drug. You see, because opium was the only halfway reliable painkiller around, everybody took it – including people like William Wilberforce, the great Christian abolitionist, and William Gladstone, who popped some in his coffee before speaking in Parliament to improve his rhetorical powers – even if not all of them became addicted.

In later years, opium – and especially its stronger derivatives morphine and heroin – began to be used by those simply seeking a pathway to an altered consciousness, a shortcut perhaps to the sort of transcendent mystical experience some people get from religion. In doing so, they were merely following pattern taken by mankind in all civilisations since the dawn of time, however much Hitchens may wish that weren’t the case.

As restrictions were introduced – for opium, not alcohol and tobacco – drug-use declined massively and by 1960 there were less than 100 registered heroin addicts in the UK. They received their drugs from doctors, cheap and undiluted, and were largely able to enjoy a normal existence (at least in comparison with their criminalised counterparts in America). However, as drug use increased in the 1960s, restrictions were imposed, culminating with Hitchens hated Misuse of Drugs Acts in 1971, after which drug supply passed almost completely into the hands of the criminal and use immediately rocketed. A far cry indeed from those morally virtuous days of the 1850s, when Britain’s great and good could simply pick up a bottle of premium laudanum from their nearest general store and retreat into blissful opium dreams.

2 responses to “Peter Hitchens on drugs and the moral, opium-eating, Victorians”