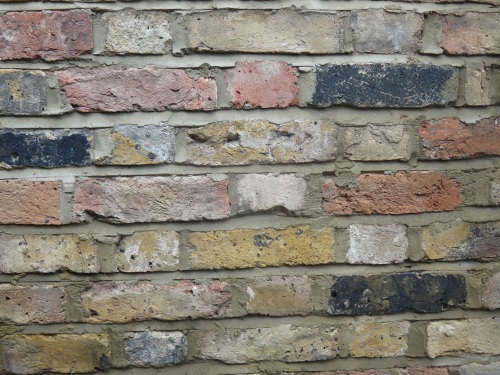 ‘The bricks – laid Flemish bond, headers and stretchers alternating – were all old London stock bricks, but of many kinds and colours: rust red, beige, grey, brown, nearly black. Here and there were yellow ones – malm bricks made with an admixture of clay and chalk. The cumulative effect was pleasing – the variety gave texture, interest and warmth to the surface of the wall. The eye approved the range of colour, the uneven look, the way in which each brick differed from its neighbour and yet was in subtle harmony. But, more that that, to look at it was to see the way in which this wall arose from the ashes of many buildings. Studying it, Matthew saw in his mind’s eye warehouses and churches, factories and shops, terrace houses like this one, blasted to the ground perhaps on some furnace night of 1940. He thought of how the city lifts again and again from its own decay, thrusting up from its own detritus, from the sediment of brick dust, rubble, wood splinters, rusted iron, potsherds, coins and bones. He thought of himself, living briefly on top of this pile, inheriting its physical variety and, above all, the clamour of its references. The thought sustained him, in some curious way, as he sat at his desk in the flat which was not yet a home, or as he moved through days and through the city, from Finsbury to Docklands to Covent Garden to Lincoln’s Inn.