This was a piece I wrote for the January 2011 issue of Metropolitan magazine.

In July, the Mayor of London introduced a scheme that allowed the public to rent bicycles from 300 docking stations in different London. Within days, maps could be found all over the internet showing exactly where each docking stations could be found and which were the most popular. These maps were largely unofficial and all free, created by tech geeks for fun and copied to internet forums for the use of cyclists, tourists and map lovers. It proved once again that Londoners will map anything. There are maps for free wi-fi hotspots, maps that chart where the most Twitter activity comes from and maps that find the nearest toilet. One of my favourite maps is this 1970s version of the knitted football tribes of London.

This love of maps is engrained in London’s psyche, the result of living in a chaotic and unplanned metropolis. Two of the city’s favourite icons are maps: the A-Z, that portable atlas which even seasoned Londoners carry in case they get lost; and the Tube map, a design classic that has been copied by transport networks all over the world and is regularly ‘mashed-up’ by artists, replacing stations with footballers, philosophers, films, authors and anagrams.

In 2006, the British Library organised a ‘London: Life In Maps’ exhibition, curated by Peter Barber, the library’s Head of Maps, who thinks London’s love of maps is far stronger than anything you might find in Paris. ‘The French have a very cool attitude towards maps,’ he says. ‘They don’t, on the whole, use them and there is no comparable market in old maps to the one we have in London. You have to give away old maps of France. Maps in France are associated with authority – they were tools of administration and control. Whereas in England maps were commissioned privately and so are not perceived as being so menacing.’

Barber names the key maps of London’s past –the Copperplate map of the 1550s, the Morgan map of 1682, the John Rocque map of 1746 and the Horwood map of 1829. Barber makes a distinction between two kinds of maps. There are functional maps for getting you from A to B (or A to Z) and there are maps that work thematically or artistically to present information or ideas over a cartographical plan. The thematic map has been popular in London for centuries – the most famous is Charles Booth’s Poverty Map of 1889, which colour-coded streets according to income. Another is ‘The Modern Plague’ of 1886, produced by the National Temperance League, which showed pubs in central London. These maps are designed to transmit an idea, not aid mobility, and are fascinating to study. One of the first was John Snow’s map, tracking cholera outbreaks in Soho.

Such maps are now getting easier to compile. ‘It’s said that 80 per cent of all knowledge is spatial, and you can geo-reference any phenomenon and plot it on a map,’ says Barber. ‘With digital mapping, the techniques to do this are within the range of everyone. Digital mapping isn’t new, what is new is the ease with which it can be done and the extent of the information that can be plotted.’

Simon Foxall summarised this in his book ‘Mapping London’, writing: ‘Maps have been made to do things they were never expected to tackle and, in doing so, have exposed patterns, connections and ideas that were as interesting as they were unexpected. ‘

Straddling these two types of map is Bill Visick, a former manager at IBM, who has developed the London Time Travel Explorer (TTX) app for the iPhone. This features four maps of London dating from 1746 to 1862 and a contemporary map of the city. Using GPS technology, the user can fade between old and new maps to see how the street on which they stand has changed. It’s virtual time travel.

Visick had been collecting maps of his Kensington home for years, but smart phones allowed him to take this to another level. ‘What sparked it for me was realising that the street I lived on contained the first buildings ever built in Kensington,’ says Visick. ’I was standing outside my door and thinking, “blimey, that was a hedge and that was a field”. So the first thing I did was put this old map on my phone and walk around looking at it – that became the prototype and that’s where the idea of TTX came from. It happened almost as soon as I realised the technology would allow it.’

The novelist and poet Blake Morrison has spoken about ‘our craving for interactivity’, and that is something the artist Stephen Walter is also exploring through maps. In 2008, he created The Island, a vast, exquisitely detailed map of London, crammed with cultural and political references and in-jokes. ‘People have been suggesting I do an app,’ says Walter. ‘The British Library did a brilliant browsing tool for the map and people have suggested I do something for a phone or tablet computer. I’m interested to see if there’s a way people can leave their own tabs on the map, personally configure it with their own information.’ 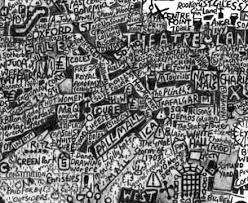 The Island is modern in its outlook, but Walter was following a long tradition. ‘There’s a huge, strong history of map-making in London and we do like to beat our chests about it,’ says Walter. ‘It’s a bragging thing, a celebration of history and size. The Island was a spoof of a medieval map. The twist was that a lot of it was very personal and also a contemporary reaction to the city, whereas at first glance it looks like a pretty conservative world map.’

It has long been understood that the map is subjective, reflecting the views of the maker, although rarely as blatantly as in The Island. In ‘Mapping London’, Foxall writes, ‘The map, as a scaled replica of the entire city, presents a choice to its maker: not what to include, but rather, what to exclude. The mapmaker, like a sculptor, must chip away at the raw block of material that is the city to reveal the shape and representation hidden inside.’

Barber expands this point. ‘Different maps show different things and your judgment of a map depends entirely on what you want from it. In some cases you could draw a direct contrast between the map the man in the street wants and the map the expert says is best. The A-Z is a complete travesty of mapping because the streets are grotesquely enlarged and the open spaces much reduced.’

The irony of the growth of digital mapping is that it comes at the expense of the old-fashioned kind. People no longer need A-Zs, because they can use GPS or SatNav. ‘I spoke to somebody the other day, a businessman in his 60s, who no longer takes directions,’ says Visick, with one example that stands for thousands. ‘He knows he can get anywhere on his phone.’

And into this breach step the digital mappers, who offer information in a manner that all of us can understand. London can be a daunting city to comprehend, so a thematic map that breaks the city down into easily absorbed chunks of information located spatially is very helpful. As Walter muses, ‘It seems the more complicated life gets and the easier it gets to traverse the landscape, the more maps become all about ourselves.’

5 responses to “London in maps”