I have written two pieces for the Canal & River Trust.

The first is about what it’s like when it rains on a canal boat.Being on the canal when it rained could be a powerful experience, from watching a storm approach you across a basin to the sound of being woken by fat drumbeats of rain on a metal roof at night. I spoke to the writer Melissa Harrison, whose book Rain: Four Walks In The English Weather has just been published in paperback by Faber, and also quote this song by Pulp.

I’ve also written about Eric De Mare, a photographer who explored the dying canal network on a makeshift boat just after the Second World War. His photos, collected in the classic book Canals Of England, were instrumental in reigniting interest in the canal. As an architect, he particularly admired their functional beauty, the simplicity of “architecture without architects”, and the way the bridges, locks and towpaths blended with the natural landscape. He photographed all aspects of the canal, but my favourites are his images of weathered bollards, which he describes as accidental sculptures.

His bridges are beautiful. 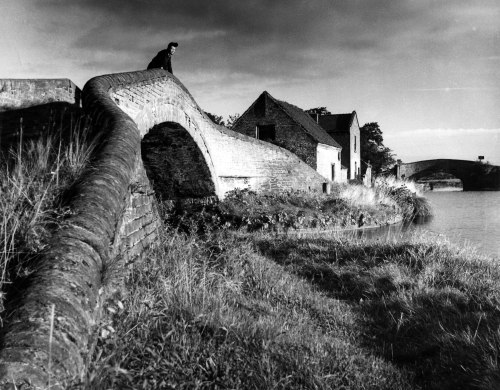 He would later repeat this sort of work with photographic surveys of the Thames and then the rest of the country’s industrial infrastructure – the breweries, warehouses, docks, factories and, of course, power stations.